There are two primary ways of thinking about understanding scripture literally. One has to do with how the words are translated. For instance, are the original Hebrew and Greek of the Bible translated with word-for-word literalness or with a meaning-for-meaning approach, sometimes called dynamic equivalence? 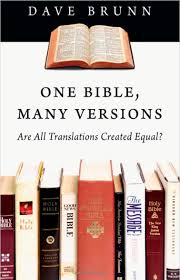 The other way of thinking about literalness and scripture has to do with whether we get that some of the stories are metaphorical and not literal history. Those who read the whole of the Bible as if it were in all ways literal history or accurate science -- the term of art for such an approach is inerrancy -- may believe they hold a very high standard for understanding scripture, but, in fact, it is a robotic approach that misses much of the point.

I most recently wrote about this second kind of literalness recently here when I talked about a new book here. And look below in the "Related Articles" section for a blog entry I did recently called "The distortion of literalism."

Today I want to introduce you to a book that pays much more attention to the first kind of literalness, having to do with translation choices from Greek and Hebrew into English.

One Bible, Many Versions: Are All Translations Created Equal, by Dave Brunn, raises what may be troubling questions for people who want their English Bibles to contain exactly the words God would want to have in the text.

The author spent many years in missionary work in Papua New Guinea, helping to translate the Bible for the Lamogai people. In that work, he went back not only to the Greek and Hebrew but also to various English translations. And he made a discovery that obviously still bothers him:

"My work as a translator brought me to the realization that literal Bible versions in English often take turns being the most (or least) literal among their peers. . .As I continuied comparing English Bible versions, I was shocked to find that not only are literal versions not always literal, but sometimes the notably nonliteral versions are more literal than the so-called literal ones."

He even found that when Robert Young did what he called Young's Literal Translation in the 1800s, Young managed to maintain literalness less than 100 percent of the time. For instance, he rendered the Greek word "logos" as "word" only 86 percent of the time, using 11 other words to translate it.

The point I want to make about all of this is that when we read holy writ of any religion we must not leave our brains at the door. We must recognize that different translators make different choices -- and sometimes they're terribly wrong. We must acknowledge that the original word may have meant something rather different 2,000 or 3,000 years ago than it does today in the same language. And we should be aware that almost every year we find older and better manuscripts than previous translators had available.

For example, the team that produced the 1611 King James Version of the Bible had available only about 15 manuscripts from which to work. Today, translation teams have some 5,000 ancient manuscripts of the texts they're seeking to turn into English versions.

So although literalness of translation may be a useful thing to try to achieve for some purposes, it is not done with 100 percent consistency by anyone. And Brunn's book documents that. Beyond that,  literalness of meaning is often simply a silly way to try to grasp the meaning of what people of faith consider God's word.

NO WONDER AMERICA IS SO HARD TO GOVERN