As most of you know, the new pope, Francis I, is a Jesuit, meaning he's a member of the religious order known officially as the Society of Jesus (whose seal you see pictured here). 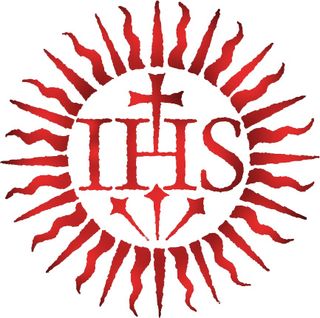 And he's the first Jesuit ever to become pontiff. That's a pretty long drought, given that the Jesuits were formed in 1534, coincidentally the same year Henry VIII in England broke away from the Catholic Church to create the Church of England, which he viewed simply as the Catholic Church in England but which became the center of the Worldwide Anglican Communion.

I mention the Jesuits today because it was on this date in 1541 that Ignatius of Loyola was elected the first general of the Society of Jesus. Loyola had been a Dominican but, not unlike Martin Luther, found that he had issues with his church. So he formed the Jesuits, which Pope Paul III approved in 1540.

It's fascinating to think about what a wildly dynamic time the early 1500s were in terms of religion. Luther was ordained a priest in 1507 (also, coincidentally, on this date) and 10 years later he nailed his decisive 95 theses to the door of the cathedral in Wittenberg, Germany. That same year, 1517, the Ottoman Turks sacked Cairo.

The Catholic Church was deeply embroiled in how to respond to the growing Protestant movement at this time. I've already mentioned the founding of the Church of England. Beyond that, the Anabaptist movement is finding its sea legs in the 1520s.

By the way, the term Protestant came about when followers of Martin Luther protested a ruling from the Diet of Speyer forbidding the teaching of Luther's thoughts in Catholic states while allowing Catholic teaching in Lutheran states.

Imagine being a religion blogger in the early 16th Century. It wears me out just thinking about it.

A bill just filed by Republican lawmakers in North Carolina would create a state-established religion. Doesn't North Carolina already have one? Basketball?