Just before Easter this year I had a conversation with someone about what Islam believes about Jesus' crucifixion and resurrection. Although Islam considers Jesus its second most important prophet, it officially denies that he was crucified and resurrected, as described in the New Testament. 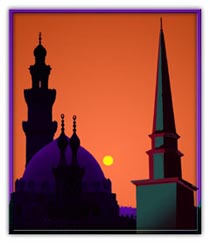 Then, after Easter, I found this blog entry about Easter in the Qur'an by a Muslim blogger at Beliefnet.com. You can see there that the traditional Islamic explanation for what happened to Jesus is that someone else was executed in his place or that he was removed from the cross not quite dead and survived.

It's not official Muslim theology, but Muslims have told me that besides the obvious reason for believing that about Jesus -- it's in the Qur'an -- another one is that crucifixion would have meant a prophet losing face. And losing face is a big deal in Islam, perhaps because it was -- and is -- a big deal in Middle Eastern culture.

To amplify the Muslim view of all this, I turned to one of the books on my bookshelf, Understanding Islam: An Introduction, by C.T. R. Hewer, who writes this:

"The Qur'an refers to the end of the earthly life of Jesus in (chapter 4, verses 157-159). Here we read that the Jews did not crucify Jesus or kill him but it only appeared that way. Jesus actually was 'taken up' in God. Muslim scholars have interpreted this verse in different ways. Some have held that Jesus was not just put upon the cross at all but that someone else was substituted for him and was crucified in his place. Others have held that he was indeed put upon the cross but was not crucified to death; instead he was taken down in a faint, revived, and then 'taken up' by God. Still others have seen this as a rejection of the idea that the Jews killed Jesus, and that whatever happened was an act of God alone. . . .Jesus is expected to return in the Last Days."

In Demystifying Isalm, Ali Shehata adds to that latter point this way:

"Muslims further believe that Jesus will return near the end of time to kill the Anti-Christ, and that he will remain on Earth as a righteous ruler and that he will marry and have children before his death, whereupon he shall be buried next to the Prophet Muhammad. In fact, there still exists till this day a reserved place for him beside the grave of the prophet Muhammad in the city of Medinah."

Well, Muslims are obligated to believe that the Qur'an is the word of God while Christians are obliged to believe in Jesus' crucifixion and resurrection, so the common ground between the two religions is simply respect for Jesus, not details of his death and what may have happened after that.

AND SPEAKING OF THE DEATH OF JESUS. . .

If, like me, you've long been fascinated by the Shroud of Turin, which some people believe to be the burial cloth of Jesus Christ, you may already know that new testing suggests the shroud dates to the time of Jesus. An earlier -- and apparently mishandled -- carbon dating had dated it to about the 1300s. The best recent book about all this is one I reviewed last year here. Have a read.