There still is much we don't know about the Boston Marathon bombings and the perpetrators. But once again the story raises the question of the relationship between religion and violence. 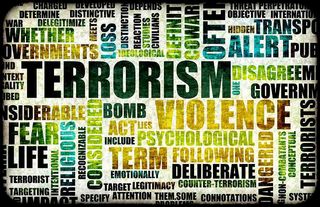 And before any of us offers simplistic answers, we would do well to face up to the fact that in many ways the history of religion is the history of violence. Yes, of course, it's also the history of transformation, of good will, of redemption, of compassion, mercy, justice, love.

But religion misused is often religion that promotes violence.

Misused in what way? In ways that make us falsely certain that we hold the truth with a capital T, that we know all the answers, often even before we hear the questions. When we imagine that we understand the mind of God on all matters, we are well on our way down the path that begins with arrogance and ignorance and leads eventually to hatred and violence.

One of the first signs that we've let our finite minds imagine that they are capable of grasping infinite truths in an exhaustive way is our choice of how we read scripture. If we are literalists who imagine that we can understand the richly layered meanings of holy writ in a complete way, we are on the wrong road.

And when we think we know exactly what God wants at all times and in all circumstances of our lives and in the affairs of the world, we're so far from the right path that it may not be possible to find our way back.

II Corinthians 4:7 talks about holding the truth of the gospel in "earthen vessels," or clay jars. It's a way of saying that even what we're convinced is truth must be held gently, recognizing that we may not possess it in full.

As I say, there's a lot we don't yet know about the Boston bombers. But it will not surprise me to discover evidence that in at least one of their heads there was false religious certitude, a profound plague on humankind.

Faith does not mean having all the answers. Rather, it means being able to live with the questions and trusting that, in the end, God knows and we don't need to.

(By the way, the Religion Newswriters Association has put together this collection of resources to help journalists writing about religious violence. Perhaps there are some things there that may interest you.)

My wife and I were having dinner with friends Friday evening when one of them asked me why she almost never hears Muslims condemn terrorism. A bit surprised, I told her lots of Muslims condemn terrorism whenever an incident happens, though often the press doesn't give such condemnation much play. But here is an example of a story about Muslims condemning the Boston bombing. I hope our friend sees this. But the question of Muslim condemnation of violence is a complicated story. In some countries such condemnation can result in the condemner being a target of radicals. And sometimes Muslim leaders (there's no Muslim equivalent of a pope, say, so Muslim voices are more scattered) seem to Western ears to be speaking out of both sides of their mouths.

P.S.: There will be an interfaith healting service to remember the victims of the Boston bombings at 6:30 tonight at Unity on the Plaza, coordinated by the Greater Kansas City Interfaith Council.