One of the mysteries (and clarities) of Christianity is the New Testament, those writings from the early Jesus Movement within Judaism that in the 4th Century were declared to be holy scripture and part of an unchangeable canon. 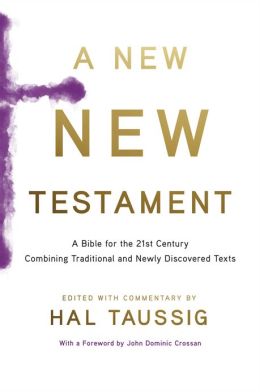 The New Testament consists of 27 books, including the four gospels. Many of the 21 epistles in the New Testament are attributed to the Apostle Paul, though today many scholars say that probably only seven were actually written by him.

But these 27 chapters were not the only early writings about Jesus and what eventually became Christianity around at the time. Some were lost, only to be rediscovered in recent times. Some were put on a shelf and forgotten about. Some were rejected as part of the official canon because they proposed or reflected theology that was inconsistent with what church leaders thought Jesus taught and were inconsistent with his life, death and resurrection.

But in recent years many of these writings have attracted the attention of scholars, including members of the controversial Jesus Seminar. And as interest in them has grown, so has the idea of collecting them in a book that includes the New Testament to see how, if at all, they match up and what new light they might shed on the origins of the faith.

That idea now has been realized in a book provocatively calledw A New New Testament: A Bible for the 21st Century Combining Traditional and Newly Discovered Texts, edited by Hal Taussig, who teaches at Union Theological Seminary in New York as well as at the Reconstructionist Rabbinical College.

It is a useful book that will give readers a broader sense of the wildly dynamic religious atmosphere of the First Century, when instead of speaking just of Judaism it's more accurate to speak of Judaisms.

Jon Dominic Crossan seeks in his foreward to justify using the title A New New Testament instead of, say, Early Christian Writings. But the fact that he raises the question at all indicates he and Taussig expect some Christians (mostly those who would identify themselves as fundamentalist or conservative) to object to the idea that the New Testament needs changing or updating.

Well, no doubt there will be such objections to this book. But if it is understood that the book is merely offering some additional writings from the time that much of the New Testament was written, then no one should think that this book is the nose of the camel under the tent and, thus, a first step toward opening the canon.

The full New Testament is in this book, by the way. It uses the Open English Bible version, "with permitted revisions by Hal Taussig."

The origins of Christianity are fascinating. This volume should help all of us understand the variety of thought that was part of that formative process.

A TALE OF PRISON MINISTRY

I've long admired people who do prison ministry. So I was intrigued to read this New York Times Magazine piece Sunday about such ministry among imprisoned drug cartel members in Mexico. Although I have visited prisoners  and have even spoken to a group of prisoners by invitation, I'm not sure I'd have the long-term stamina to do prison ministry. You?