The reactions to the bombings in Boston have helped me to articulate something I hinted at here on the blog the other day -- the idea that somehow we've responded to disaster by telling victims that "my thoughts and prayers" are with you. 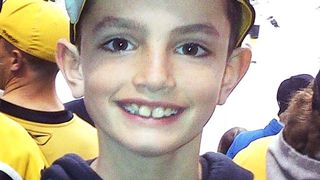 Well, it's a decent and civil response, however shallow and inadequate it might be. It's certainly better than wishing more evil on the victims.

But the words seem too easy, too rote, too empty of examined meaning, even if the people who are the object of our thoughts and prayers appreciate them, as expressed in a statement from the father of Martin Richard (pictured here), the 8-year-old boy killed by one of the Boston blasts this week.

What does it really mean to offer someone our thoughts and prayers?

It certainly can mean that we actively empathize with people, share their pain, imagine what they're going through. And perhaps in that process we might be led to think of other ways we might be of help.

But do our kind and generous thoughts someone reach across time and space and make a difference in the lives of people hurt by catastrophe? That's hard to know. Science so far hasn't come up with much that's either definitive or convincing about thought travel. And what religion would say is that the thoughts are ways to change us and our behavior, not to alter the lives of the people about whom we're thinking.

Much the same can be said of prayer. Many religious leaders will tell us that although prayer is a means of communication with God, the end result often is to change the one who is praying. Most people of faith believe that prayer can be an effective way to opening up our hearts to God and to seek a particular outcome. But often we may find ourselves praying for something that, in the end, would not be good for us and, thus, something God would not want for us.

My point is that we should be wary of hearing ourselves offer simply an easy "My thoughts and prayers are with you" response. Like bringing a casserole to the home of a family grieving a death, it's a place to start. And in some cases it may be all we can do. But a year or two years or 10 after 8-year-old Martin Richard died in the Boston bombing, who will be somehow present with that family to be a continuing healing presence?

OUT OF CHURCH CLOSETS

Pope Francis I continues to hit lots of right notes. In a message to his fellow bishops from Argentina he says this: "A Church that does not go out of itself, sooner or later, sickens from the stale air of closed rooms." That's partly why the great pontiff John XXIII insisted on Vatican II, which, as they say, opened the windows of the church to let in fresh air. But it's not enough to let air in. The people must also go out and serve the wounded world.