When news of the Boston explosions spread on Monday, my first concern, quite naturally, was about both family and friends who live there. 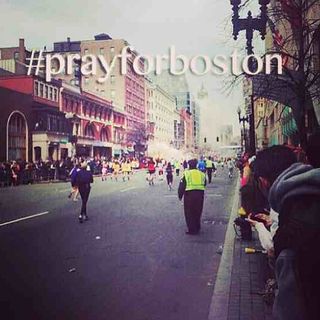 They all were fine. Then I worried about the painful effects on my sister and her husband, whose son died as a passenger on the first plane to hit the World Trade Center on 9/11. My sister checked in by e-mail, describing the Boston bombings as "all so triggering." I knew what she meant.

Finally I began to think about how individuals caught in the whirlwind were responding and, next, how the clergy would deal once again with the question of evil -- a question that seems to pop up in some form nearly every day. Theologians call this the question of theodicy -- why there is evil in the world if God is good. All answers to that question finally fail. There are no exhaustive explanations.

I was reassured to find this piece, which described how the social media quickly turned into a virtual house of prayer.

Somehow expressions of faith adapt themselves to the times. Suppose this had happened 25 years ago. We'd have never heard then that #PrayForBoston was trending on Twitter. And yet my hope is that people who tweet out such prayers and such hashtags today don't think they've taken care of their responsibilities just in that way.

Each of us in the midst of such turmoil needs to be as much of a physical presence as we can be with those affected. Tweets are fine but they can't replace our bodily (or voice) presence.

As you think about how you and others can do that, let's also remember the priests and rabbis, pastors and imams who will be comforting the afflicted, including conducting funerals for the three persons who died. What, after all, can one say that might be comforting about the death of an 8-year-old boy?

This kind of terrorism -- whatever its source -- is one more example of what can happen when bad ideas gain currency. Our task -- yours and mine -- is to make sure that good ideas about love and justice and mercy and compassion are also heard in the public square.

THE RIGHT OF RETURN. . .TO POLAND

When I was in Poland a few years ago working on my latest book, They Were Just People: Stories of Rescue in Poland During the Holocaust, with Rabbi Jacques Cukierkorn, we often ran across people who expressed a sense of unease about what might happen if Jews in large numbers returned to Poland. More than 90 percent of the almost 3.5 million Jews living in Poland at the time World War II started were murdered in the German-led Holocaust. Now there's an art exhibit in New York that focuses on that very question. Some Jews who left Poland in WWII and survived still believe they are entitled to the property they were forced to abandon, and some of it has been returned to a few of them.