Several times in several venues over the years, I have contended that all sin is ultimately idolatry. It's why the first of the Ten Commandments insists that we have no other gods before God. 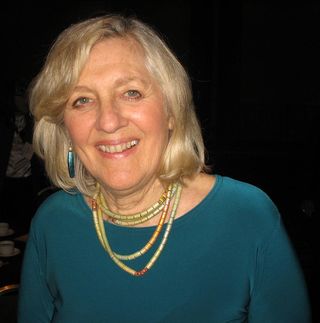 Part of the prophetic task of people of faith is to unmask idolatries, to show them for what they are, to turn our hearts and minds away from them, no matter what seductive or culturally approved form they take.

Thoughts of idols and idolatry came to my mind the other evening here in Kansas City when I attended the annual dinner of the Center for Practical Bioethics (CPB) and listened to former Boston Globe columnist Ellen Goodman (pictured here) speak about her recent work as co-founder and director of The Conversation Project, which encourages families to talk with each other and with their health care providers about how they want their final days of life to be handled. This work is very much in harmony with the CPB's "Caring Conversations" work of recent years.

Ellen reminded us how much has changed in our lifetimes when it comes to the delivery of health care.

"My mother's generation. . .regarded doctors as gods -- Dr. God, delivering a diagnosis like an infallible doctrine and prescriptions like tablets from the mount. My generation is somewhat more likely to regard doctors as partners, if not even junior partners."

Regarding physicians as gods caused lots of trouble, though regarding them as always-fallible buffoons to be sued for every little thing also causes lots of trouble.

The courts may be able to stifle the latter, in the end, but they can do nothing about the former, and it's more dangerous, given that regarding anything but God as a god winds up being destructive in all kinds of ways.

We're still in the midst of big changes in health care in the U.S., but perhaps no change is more important than patients themselves taking responsibility not just for their own health but also for their relations with health care workers, including doctors. This requires people to be well educated about matters of health and not to succumb to the latest health care fad so that they go over and over and over to their doctors to "ask if (blank drug) is right for you," as the relentless TV commercials put it.

Ellen's new initiative, The Conversation Project, like the work of the Center for Practical Bioethics, can help move our population toward a more reasonable and informed way of handling end-of-life issues. But, in the end, it's up to us individually and as family members -- and certainly not up to some human Dr. God.

(After the dinner I reminded Ellen that she and my wife and I had sat at the same table at the 2008 annual conference of the National Society of Newspaper Columnists in New Orleans when the NSNC gave Ellen its coveted Ernie Pyle Lifetime Achievement Award.)

Just for fun today, here's a great video that explains the Vatican. Sort of irreverently but pretty accurately. And with a new pope maybe we all should know this stuff.