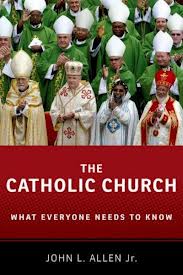 And, specifically, John knows more about the Catholic Church, given how many years he has spent in Rome covering the Vatican, than almost anybody.

So his new book, The Catholic Church: What Everyone Needs to Know, is a wonderfully readable description of "All Things Catholic," as John's NCR column is called. (Because I'm a Protestant, my NCR column is called "A small c catholic.") So because we're both NCR columnists you might expect me to do nothing but praise this new book.

And mostly you'd be right -- not because I know John but because the book is quite worthy of praise, and will go on my home office bookshelf as a handy reference. In fact, John's new book already has saved me from making a small technical wording error -- but an error nonetheless -- in an upcoming NCR column.

John's book, written in an easy narrative style with questions that he answers, is simply packed with information about the church -- a lot of which will, I bet, be news even to many Catholics. Did you know, for instance, that American Catholics now represent only about 6 percent of Catholics worldwide? And that what John calls "the typical Catholic" in the world today "is a Brazilian mother with four children."

And did you know that the big monolith we imagine the Catholic Church to be is "twenty-three separate churches that make up the one Catholic Church"? For an explanation of this, see page 24.

John explains the hierarchy, the Vatican, canon law, marriage annulments, religious orders and much, much more.

And although he devotes only a couple of pages to the still-raging controversy over whether the pope and Vatican did enough to save Jews in the Holocaust, it's a quite-good summary that acknowledges there still is a lot we don't know. And although John doesn't go into the long history of anti-Judaism in Christianity (nor should he have) that I do in this essay, he covers that well, too.

If I find fault with this book it's my wish that John would have assumed the role more often of an opinionated columnist rather than a news reporter. The book contains a lot of descriptions of controversies and disputes in the church and although I can guess where John might locate his own thinking about some of these I wish he'd simply told us more clearly than he does. Had he done that carefully, I think it might have added -- not subtracted -- from the volume's value as a source of reference. (Perhaps, as a Catholic himself, John didn't want to sound infallible.)

In any case, I was pleased that John was quick to acknowledge in a section on the origins of the church that "there are numerous mainstream Bible scholars and historians, including not a few Catholics, who insist that Jesus of Nazareth never intended to institute a church. . ." Indeed, the official Catholic position that Jesus founded the church finds almost no support today among reputable modern scholars.

So for a good walk-through of that issue and many other matters having to do with the church, it's hard to think of a better reference book than this one.

A RICH CONTEXT FOR WORSHIP

As Easter hymns continue to ring in the ears of Christians, here's a good piece about what it means to worship in a multicultural congregation. One of the pastors quoted in th piece says that “Multicultural worship is an image of the kingdom of God." And I think he's right. The most well-integrated congregation I know about is the Sheffield Family Life Center, an Assembly of God Church in Kansas City, Mo.