Anyone even moderately familiar with 20th Century history knows that Auschwitz was Ground Zero for the Holocaust -- or at least became the symbol for the genocide of European Jews that Adolf Hitler's Nazi government wrought. 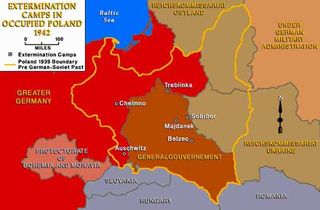 Some people more well acquainted with this history also may recognize some of the other death camps that the Germans built in Poland -- Treblinka, Chelmno, Sobibor, Belzec and Majdanek.

But new research into various kinds of concentration camps, including ghettos, is turning up a number that is stunning even to Holocaust scholars, it's reported.

I had read a bit about the research a year or two ago, but The New York Times last week gave us the update to which I've linked you in the preceding paragraph. And it's well worth a sobering read.

As the piece reports, "The researchers have cataloged some 42,500 Nazi ghettos and camps throughout Europe."

Scholars who specialize in Holocaust studies will have to unpack the meaning of all this carefully, but I don't see how they can avoid this conclusion: Eventually it would have been extraordinarily difficult for adult non-Jewish residents of Europe not to have a good sense of what the Germans were up to in their plan to destroy European Jewry.

When Rabbi Jacques Cukierkorn and I were in Poland to do interviews for our book, They Were Just People: Stories of Rescue in Poland During the Holocaust, we visited several death camps, including Majdanek, at the edge of Lublin. It is adjacent to a residential area -- and was at the time. Each morning people going to work or school or simply out walking had to pass by the edges of Majdanek. To feign ignorance of what was happening there was simply self-deceit, even if at first the murdering scheme seemed so outrageous as to be unbelievable.

The Buddhists tell us to be mindful, to pay attention, to notice. Some people are better at that than others. But it's hard to imagine now how any rational, sentient non-Jewish adult at the time of the worst of the Holocaust (1942-43) could not have understood at least the general outlines of the Germans' grotesque program of mass murder.

BIRD OF A DIFFERENT FEATHER

A fake cardinal tried to sneak into the gathering of cardinals at the Vatican this week. Probably shouldn't have dressed like a blue jay.

P.S.: Time is getting short for you to sign up for either of two seminars I plan to co-teach in April. The first, April 8-13, will be about congregational transformation. It will meet at Ghost Ranch in New Mexico. For details and to register, click here. The second, April 26-28, will be about the risks of forgiveness. It will be at Kirkridge Retreat Center in Pennsylvania. For details and to register, click here.