In war in recent years the cruel term "collateral damage" has come to mean the deaths of people who were not the main target. 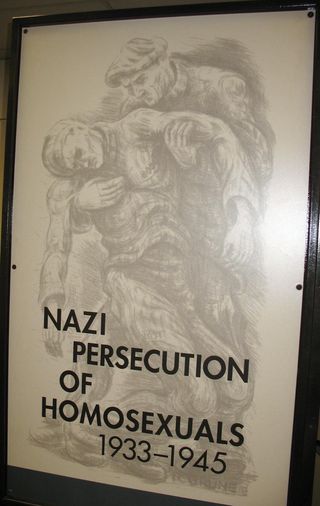 If that ugly term had been in use in the Holocaust it would have referred not to European Jewry, whose 9 million members the Germans slated for murder but, rather, for the others who also died, including non-Jewish Poles, Roma (Gypsies), the physically and mentally disabled and homosexuals.

An exhibit currently on display in the second-floor Dean's Gallery of Miller Nichols Library on the campus of the University of Missouri-Kansas City focuses on one of those groups, homosexuals.

The free educational and moving exhibit is called "Nazi Persecution of Homosexuals: 1933-1945," and is the work of the U.S. Holocaust Memorial Museum in Washington.

But it will be on display only through April 10. So your time to see it is running out. And it's well worth a trip to the UMKC campus.

Gays and lesbians were among those whom Hitler's Nazi regime considered "enemies of the state." As exhibit material explains, "The Nazis did not seek to exterminate all German homosexuals but endeavored to change their 'erroneous' sexual behavior through forced 're-education' or, failing that, isolate their 'contagion' from society."

Of the roughly 100,000 people arrested for being homosexuals, about half served prison terms and thousands died in concentration camps.

Just as modern antisemitism has deep roots in the long history of anti-Judaism found in Christianity, so, too, is it inconceivable that Nazi disgust for homosexuals doesn't have roots in the long Christian tradition of misunderstanding what the Bible really says, if anything, about homosexuality. (For my essay on that subject, click here.)

The Nazi-style bigotry against homosexuals lives on today in such despicable places as Westboro Baptist Church in Topeka, Kan., and in the minds of some leaders of Uganda -- among many other places.

But it's worth spending time to see how this hatred played out in the 12 years when the existence of the Third Reich cursed the planet.

PUTTING WORDS IN THE POPE'S MOUTH

A fake interview with the new pope? Oh, indeed. This blog describes the story. Why in the world do people bother faking such stuff? Now, I can see doing a fake interview as satire and telling readers that's what it is. But not trying to pull off this kind of fraud. Well, it won't be the worst thing this pope will encounter while in office.

P.S.: I mentioned here over the weekend that the Jewish newspaper The Forward has named Rabbi Jacques Cukierkorn of Temple Israel of Greater Kansas City as one of the country's most inspiring rabbis. Now another Kansas City area rabbi has been honored. Newsweek has named Shmuly Yanklowitz of Congregation Kehilath Israel of Overland Park, Kan., as one of the nation's top 50 rabbis. Mazal tov all around.