Covering religion, I have met a lot of inspiring members of the clergy -- from priests to imams to pastors to rabbis. 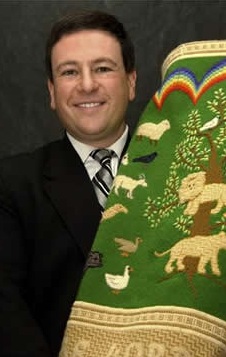 At an event at Children's Mercy Hospital recently, for instance, I shook said hello to Rabbi Herbert Mandl. Then, shortly after that, I read this Kansas City Star story about how he's going to become the first rabbi "to be admitted to the Vatican Library to do research among its ancient manuscript," as the story reported.

But this weekend I want to offer a high-five to another Kansas City rabbi, my friend and co-author Jacques Cukierkorn, whom the Jewish newspaper The Forward has just named one of America's most inspiring rabbis.

There are many reasons people nominated Jacques for this honor -- including his work on the book he and I wrote together, They Were Just People: Stories of Rescue in Poland During the Holocaust.

But perhaps what the judges found most inspiring was his work to convert crypto (or hidden) Jews back to Judaism. Much of this work has taken place in Latin America, where Jacques has helped many people rediscover their Jewish background and commit themselves to being part of the global Jewish community.

He is doing this work now through an organization called Brit Braja.

Jacques is a dynamo. Full of energy and always seeking new ways to exercise his spiritual gifts. I'm glad to count him a friend. Indeed, an inspiring friend -- who now has the award to prove it.

DON'T ELIMINATE FRANCIS FROM YOUR BRACKETS

Score another one for Pope Francis I, who has announced that he wants to create better relations and deeper dialogue with Muslims. So far the new man is saying good things. Hope he keeps it up.