The history of religion in America is sometimes stunningly complex and with the benefit of hindsight we are even able to declare it weird at times. 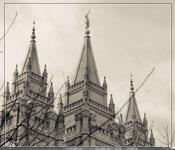 For instance, 126 years ago this weekend, on March 3, 1887, Congress passed a law giving the federal government power to seize and administer property owned by the Church of Jesus Christ of Latter-day Saints, the Mormons. (For a more detailed legal description of this and its aftermath, click here.)

Because the Congress did not like that part of Mormon theology that allowed men to marry multiple wives.

It turns out that the government held this church property for almost 10 years until the Mormons finally announced that they had officially abandoned the practice of polygamy.

It is not legal in the U.S. today to marry while already married -- though for sure there are small religious sects that have splintered off from Mormonism and that continue to practice polygamy.

But I wonder what the arguments would sound like in Congress today if someone proposed seizing the property of a faith community because Congress didn't like some aspect of that community's theology.

I'm thinking such a proposal wouldn't get very far. But maybe I'm naive.

GIVING UP FAITH FOR LENT?

The writer of this piece suggests that American Catholics, in solidarity with a reisgned pope, resign from Catholicism -- at least for this Lenten weekend. If, like the writer, it might mean exposure to other traditions, it sounds like a good idea, and not just for Catholics but for all people of faith.