Journalist Jeff Chu has written a courageous, insightful and profoundly sad book. Does Jesus Really Love Me?: A Gay Christian's Pilgrimage in Search of God in America, reveals once again the unloving nature that almost inevitably grows out of a literal reading of the Bible. (The book will be published this Tuesday.) 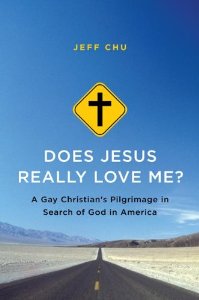 One day years from now (don't ask me when, but it's coming) most Americans will look back on the widespread anti-gay prejudice emanating from certain branches of Christianity (and a few other faiths) today with the horror with which we now think about the ways in which some Christians used the Bible to justify slavery.

Chu is a gay man who grew up a Southern Baptist and continues to love the deep attachment to God that he learned and felt as a child. But he was mystified by the marrow-deep strain of anti-gay feelings expressed openly by many (not all) Christians who would identify themselves as conservative, evangelical or fundamentalist.

He even went to talk to Fred Phelps and members of his venomous Westboro B aptist Church in Topeka.

It will be clear to most readers of Chu's book that the people who condemn homosexuals to hell have locked themselves into a gross and destructive reading of the Bible. (For my own essay on what the Bible really says about homosexuality, click here.) It's also clear that many people who spit out sexual hatred have little experience, if any, knowing gays and lesbians in any meaningful way.

The pain in the lives of gay people blecause of this hatred is often profound, and represents exactly the opposite of what Jesus told his disciples that they should bring to the world, love.

At one point in the book Chu is visiting a gay man in Maine. Together they attend the man's church and sing a hymn that contains these words: "No guilt in life, no fear in death/This is the power of Christ in me." Chu writes: "No guilt, no fear. What does that even feel like? I don't think I. . .could truly say we know. Any glimmer of guiltlessness, any sign of fearlessness, has been outside the walls of the church, not within it."

The church universal, in fact, comes in for lots of justified criticism from Chu. That's because when it comes to gay people the church often has been either silent or has adopted a stance of condemnation. He writes of the church:

"As a whole, it's an institution that has shown itself to be incapable of dealing with who we (gay people) are and where we are -- and a church that is ill-equipped for honesty is not a church worthy of the Jesus of the Bible. . . .If the church is supposed to be the body of Christ, then what I saw on my trip were our Lord's dismembered and terribly dishonored remains. Those who care at all about the concept of 'the church' should look at these ruins and weep."

One of the most difficult problems facing gay people within Christianity is that so many branches of the faith place such a distorted emphasis on hell. Listen to Chu on this:

"How many nights have I spent, sweaty and panicked and drained of tears, because I thought I would go to hell -- for being gay, for being me?"

Perhaps the most distressing part of the book is when Chu shares e-mail with another gay man who describes a session with a counselor who is trying to convince him that being gay goes against God's will and that he needs to choose to be straight.

It is clear abuse of a man in need of help to figure out how to live with a sexual orientation he cannot change. And it's again reflective of a literalistic and toxic misreading of holy writ.

As I said earlier, some day most of this rigid ideology rooted in bad theology and worse hermeneutics will disappear. But until it does, Chu's book is here to remind everyone of the extraordinarily high cost such a stance extracts not just from gay and lesbian people but also from those who hold to this prejudice. After all, as Jimmy Carter reminded us, the Rev. Martin Luther King Jr. freed not only many black people but also many whites. Living out hatred  can cost people nearly everthing.

And a church that encourages it should be ashamed of itself.

As a side note, one criticism I have of this book is its failure to include footnotes. The book contains some good quotes and interesting facts I'd love to trace back to their source, but without footnotes it's impossible, and that's frustrting.

(Just for the record: My own denomination, the Presbyterian Church (USA), now allows ordination to ministry of otherwise-qualified gays and lesbians. But so far we have not allowed our pastors to conduct same-sex weddings or blessings of their unions. So my own church still is guilty of not fully welcoming gays and lesbians. And that, too, in time, will change.)

Atheists and people of faith can be "precious allies," Pope Francis I says. Now there's another welcome change in tone from the previous pope. Style alone can't change substance, but it can help make discussions about substance mutually respectful.