Home Archives Profile
Homing in on religious history: 3-18-13
What being in community means: 3-20-13

I have said this before, so if you're tired of hearing me say it you have my permission to bail out, but here goes: You can take the Bible literally or you can take it seriously, but you can't do both. 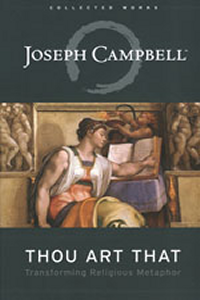 Which is not to say that there is no literal history in the Bible. But it is to say that all language is metaphorical and that's especially true of religious language.

I was thinking about this the other day again as I was reading a posthumous collection of unpublished writing by Joseph Campbell, best known for The Power of Myth, brought to the public's attention by Bill Moyers on public television.

The new collection (new in paperback, anyway) is called Thou Art That: Transforming Religious Metaphor.

Here's what Campbell says: ". . .to appreciate the language of religion, which is metaphorical, one must constantly distinguish the denotation, or concrete fact, from the connotation, or transcendent message."

In an excellent foreward to this edition, Eugene Kennedy makes the point this way: "The spiritual needs of people are neglected by religious leaders who insist on reasserting the historical-factual character of religious metaphors, thereby distorting and debasing their meaning."

In a Bible study I help to lead we recently read the book of Jonah. I told the members of the group that they were free to insist that this is the true story of a man who spent three days inside the belly of a great fish but that if they did that they might well miss the point of the book, which has much more to do with obedience and with spiritual arrogance that causes people to, well, miss the point.

Sacred writ hums with eternal truths, with visions of transcendence, with truth unbound by historical fact. If you contend that the Bible was written as literal history or as a guide to science and you thus assert that God created the world in six literal days and that Noah's ark carried pairs of every species of animal, you are like someone who cares only about the final score of a baseball game and has no interest at all in the graceful moves required to pull off a double play or the stunning beauty of a well-placed bunt.

THE RELIGION OF ATHEISM?

The other day a reader criticized me for saying here that atheism is one of many "faith positions." The reader took issue with the idea that atheism is in any way a faith. In response, I told him that it seemed to me that atheism required at least as much, if not more, faith than a traditional religion. Here's a piece by someone who agrees with me. What do you think?