As the world watched the Vatican's smoke chimney this week -- sometimes on a webcam like this one (which now simply shows the "CBS News" logo) -- I was struck by the continued oddness of a ritual that is quaint and interesting but that seems so wildly out of date as to be laughable in an age of Twitter, texts and other means of news flashes. 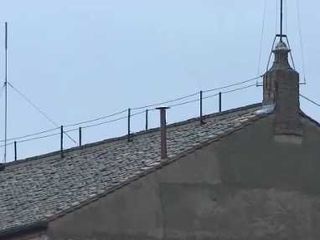 Ahead of the vote that chose the first South American and first Jesuit to be Pope Francis I, various news organizations devoted time and energy to describing the system that produces black smoke when a vote fails to elect a new pope and white smoke when it does. Here, for instance, is the Associated Press version of that.

Even Catholic press services were offering detailed explanations (sort of) of why the church would stick with such an old system of communication. Here's one from Catholic News Service.

I suppose the Vatican's smoke signals are charming rituals, not unlike fathers handing out "It's a girl" cigars to friends on the birth of a daughter. (Does anyone still do that?) But the point is that those smoke signals are nothing more than that. They are in no way comparable to the other important rituals of the church, especially the sacraments of Baptism and Eucharist -- ancient practices with continually new meaning for new generations. So there's no theological reason to hold on to the smoke messaging system.

It's simply pretentious nonsense, although it was kind of fun to see a bird land on the top of the chimney the other day and stay there for quite a while just before the white smoke emerged. Fun by meaningless.

Besides, the smoke signals seem to be in such needless tension with a church that seeks to appear relevant and engaged with the modern world. Even Pope Benedict XVI had his own Twitter account before he packed it in, for heaven's sake.

And, in the end, the world alwats learns one way or another about the election of a new pope. So maybe it wouldn't hurt for one of the cardinals to raise a hand in the next conclave and ask, "Why is our communication system stuck in the 14th Century?"

An English language site has put together a collection of sayings, sermons and such from the new pope. To get marinated in the thinking of the man who now is Pope Francis I, click here.