The election yesterday of the first South American to be pope caught much of the world by surprise, including many Catholics who follow Vatican developments closely. 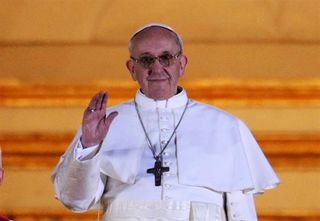 In one way the selection showed the church at its best. Its cardinals refused to be bound by expectations and traditions, reaching out, as the new pope himself said, to the ends of the earth to find a new bishop of Rome. They chose a man representative of the reality that Catholicism -- and, more broadly, Christianity generally -- is growing in the Southern Hemisphere.

North America and Europe -- especially western Europe -- have become minority voices in Christianity. The faith is finding its future in Latin America, Africa and Asia, and this election is at least a tacit recognition of that reality.

At the same time, the election shows what continues to ail the church. The new pope is nearly a dozen years past traditional retirement age. And, of course, he is -- what else -- a male, overseeing an all-male priesthood, which is both aging and shrinking.

The church is not a business, and it drives me nuts when people suggest that religious institutions should be run in a more business-like manner. In terms of managing (not spending) money, yes. Agreed. But in terms of purpose, mission, spirit, no. The church is quite different from a business and should not be held to standards that might apply to businesses. The church, as Christians like to say, is the body of Christ on earth. That means not that the church has a mission but that the mission has a church.

That said, it's hard to think of why a church that has struggled in recent years with a sexual abuse scandal, a Vatileaks scandal, a shortage of priests, bad relations with nuns and many more problems would pick as its new leader someone the age of Bergoglio.

It seems to be a serious flaw in the papal selection system that there's no chance a deeply spiritual, highly educated, thoughtful, compassionate 45-year-old would be chosen. Perhaps this is the church's way of fighting the evil of age-ism.

I understand that devoted Catholics will argue that the Holy Spirit guided this choice. And they may well be right. Besides, many Christians, including me, will argue that God often picks people who are stunning surprises to do important jobs -- start with Abraham, who was 86 years old when his first child, Ishmael, was born. Or maybe Moses, a stuttering murderer.

Clearly this choice will not put songs in the hearts of progressive Catholics, especially in the U.S., where they are largely estranged from the Vatican. Even so, everyone -- self-described conservatives, liberals, moderates or whatever -- might do well to take a step back from our human perspectives about the new pope and give things some time.

This pope certainly has my best wishes and prayers for guiding the church, and I hope we'll look back on his pontificate with the kind of nostalgia many of us have for another surprising choice -- Pope John XXIII.

(By the way, if you want to dig deeper in this new pope and his background and tasks ahead, the Religion Newswriters Association has put together this site to help journalists writing about this.)

"The Bible" series on the History Channel experienced a bit of a drop in viewers this past Sunday evening for episode number two. I watched the whole first episode and reported on it here. I made it only through about 10 or 15 minutes of the second episode before it wearied my soul.

P.S.: Allied Faith and Family, which promotes quality motion pictures that would appeal to people of faith, wants you to know that "Les Miserables" will be out on DVD on March 22.

ANOTHER P.S.: President Obama has named Melissa Rogers as his new director of the White House Office of Faith-Based and Neighborhood Partnerships, and the choice is getting good reviews. Here's an example.