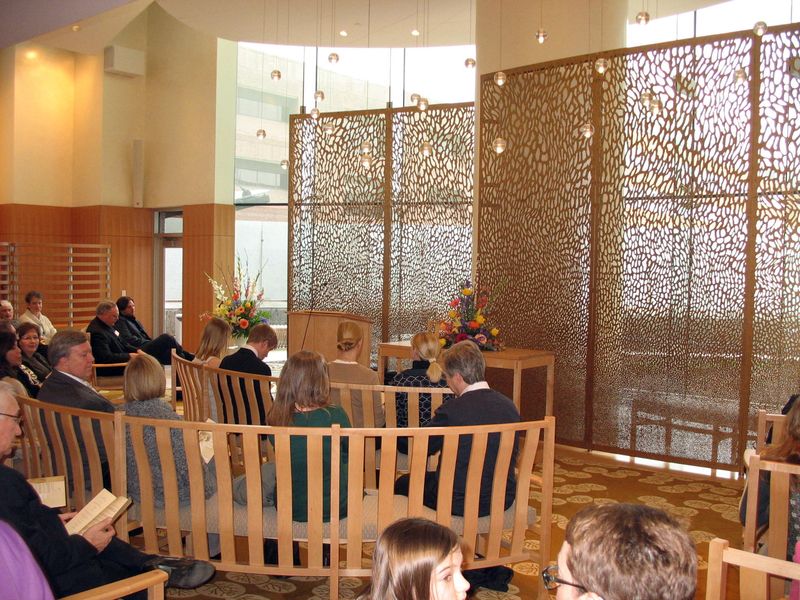 Yesterday here on the blog I told you about a new book designed to help hospitals and health care workers understand more fully the wide range of religions represented in their patient base so they can take better care of those patients.

Today I'm staying with the hospital theme to tell you about a wonderful new interfaith chapel that was dedicated Sunday at Children's Mercy Hospital in Kansas City. It's the Lisa Barth Interfaith Chapel, named after a nurse who worked for about 23 years at this terrific independent hospital (from which my wife is now retired).

The hospital took its time designing the chapel, calling on help from religious leaders around the area as well as outside and internal architectural and design experts. The goal was to create a space in which everyone -- people of any faith and people of no faith -- would feel welcome and would find peace, quiet, retreat, refreshment.

At the dedication on Sunday, prayers were offered from representatives of these religious traditions: Protestant, Catholic, Buddhist, Muslim, Hindu and Jewish. There are no religious symbols in the front of the chapel but there are several niches in a rear wall that contain items and icons representing various faiths.

Among the most visually appealing aspects of the chapel is the front metal screen that is tightly knit at the bottom but opens up as it reaches its height. I don't know what the creators of that had in mind, exactly, but it spoke to me about a journey toward openness and raised spiritual consciousness. I've given you a bit of the detail of the screen in the smaller photo here today.

The Rev. Dane R. Sommer, director of chaplaincy services at Mercy, said the chapel is a "special place that will mean so much to the children and their families who come to Children's Mercy."

Karen Cox, Mercy's chief operating officer, said the chapel is important as an example of the fact that the hospital has always recognized that children's spiritual needs "are just as important as their physical and emotional needs."

The chapel space extends to an outside plaza, which includes a fountain and some benches for meditation.

In the end, Children's Mercy has created a safe, warm and welcoming space (it includes a library and one or two separate rooms for meeting or meditation) that recognizes the reality that people are more than matter but also have a spiritual component that, for the sake of wholeness, cannot be neglected.

It's a beautiful interfaith addition to a city seeking to be known as the most religiously welcoming community in the country.

THE NEXT POPE'S TASK

The author of this excellent piece about the choice of a new pope reminds us why non-Catholics should care about this office: "If the Catholic Church falters and fragments, a crucial alternative moral voice in the world is lost." Although I think he's right, I also think the church in recent decades has quieted and compromised its own moral voice by its failure to stop the sexual abuse scandal under its roof. So one task of the next pope is reconstructing a moral foundation for the church to be able to speak to the world with credibility.

What We Talk About When We Talk About God, by Rob Bell. I like Rob Bell, author of Love Wins and other books. But, to be honest, he drives me to distraction sometimes. He's clearly not writing with me or Protestants like me in mind as his main audience. He comes out of what he would describe as an evangelical wing of Christianity and he continues to struggle in print (like early in this book) with Christians who believe women should not be allowed to teach in church or Christians who believe, as he writes, that "everybody who is gay is going to hell" or with Christians who think the world was created in six literal days. So readers of Bell, who is a pastor, must await his ultimate point while he counterpunches with people who take scripture literally instead of seriously.  Then there's Bell's preference for typographical tricks to jazz up the look of the page. It gets tedious and makes readers (well, me) feel as if Bell is writing down to us or that he worries he'll lose our attention if he writes in a traditional way. Then, in this book, there's Bell's effort to be funny in a Dave Barry kind of way. Rob: I know Dave Barry, and you're no Dave Barry. All of that said, the meat of Bell's writing can be interesting, engaging, thoughtful. In this book I especially enjoyed his layman's explanation of modern science, which, as he notes, has shown that our world is much, much weirder than anyone ever imagined. I've always been attracted to developments in cosmology and quantum physics, and Bell gives a pretty good picture of what's been happening in those fields in recent decades. Author Kurt Vonneget once wrote that people go to worship services mostly to daydream about God. If you'd like some help doing that, Bell offers it. But he may distract you too much to concentrate on what you're daydreaming about. (One more distraction: Near the end of the book Bell describes the Apostle Paul as "one of the first Christians." No. Paul was always a Jew. There was no Christianity in his time. Paul's Damascus road "conversion" was to that branch of First Century Judaism that believed the Messiah had come in Jesus of Nazareth. The followers of Jesus would not finally split from Judaism and formally become Christians for decades and decades after Paul. To call Paul a Christian leads to a serious misreading of Paul and to unnecessarily bad Jewish-Christian relations today and we should avoid that. For help with this matter, see the work of Mark D. Nanos.)

Tags: "What We Talk About When We Talk About God", Children's Mercy Hospital, interfaith dialogue, pope, religion, Rob Bell, Vatican