When my friend Steve Jeffers died in a car wreck at age 60 in 2008 he was in the midst of a long, painstaking piece of work that, he hoped, would result in a book. And a needed book it would be, too. 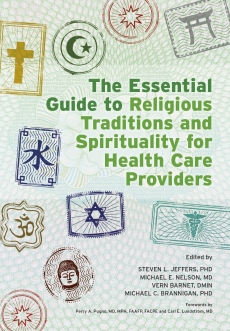 His goal, working with many others, was to produce a volume for hospitals and other health care facilities that would help doctors, nurses and others understand the religious and spiritual traditions of the patients for whom they were caring.

Steve, director of the Institute for Spirituality in Health at Shawnee Mission Medical Center, talked with me several times about this work (and showed me bits of it). He was excited about it, knowing how many times health care workers are at a loss to know how best to accommodate the spiritual needs of Buddhists, Jains, Hindus, Taoists and others who have been followers of religions outside the Abrahamic faiths common to the American experience.

But his unexpected death derailed the project. Finally, Steve's colleagues and friends have completed his work, and The Essential Guide to Religious Traditions and Spirituality for Health Care Providers now is available. Besides Steve, the editors are Vern Barnet, Michael Nelson and Michael Brannigan.

At more than $100 a copy, it is not a summer beach read. But hospitals and clinics would benefit tremendously by using the information it contains to provide careful and welcoming care to patients of many different religious traditions.

The link I've given you to a website about the book will give you detailed information about the volume plus this sample chapter about Quakerism. As you will see, readers get not only a good general overview of each particular faith tradition but also how each views such medical issues as abortion, advance health care directives and organ donation.

For Steve, this was a work of love. It would honor him if health care workers around the country could have access to this valuable book. So please pass a link to this blog entry along to any health care worker or hospital administrator you know.

ALL A-TWITTER IN ROME

As Catholics (and others) around the world await the results of the papal conclave in Rome opening today, they are keeping informed through social media, the AP reports. You're now free here to write your own joke about cardinals and tweets.

After Lives: A Guide to Heaven, Hell and Purgatory, by John Casey. This fascinating book first appeared in hardback in 2009 and now is available in a much more affordable paperback edition. It unpacks centuries of traditions about what happens to us after death. And it does so in quite an engaging and accessible way -- not in thick academic language. Work your way through about 400 pages of text and your thinking about life after death will be, at the very least, complicated by what you read, given how many versions humans have held to be definitive over the centuries. A small complaint: Casey, without much explanation, says early in the book that "the immortal soul is what is essential to human beings. . ." He'd have done well right there and then to explain that traditional Christianity (a focus of a fair amount of the book) does not teach that humans have immortal souls. Rather, that's an old Greek idea. The Christian understanding is that only God is immortal and that if humans are to have an eternal relationship with God, that will be God's call. By contrast, Christianity teaches the doctrine of the resurrection of the body and the idea that, in the end, God intends to redeem the whole creation. Two books to read with good explanations of this: Christian Doctrine, by Shirley C. Guthrie, and Simply Christian, by Bishop N.T. Wright.