One of the reasons so many American Catholics have become disgusted by the way church authorities have handled the priest abuse scandal is that even when it looks as if those authorities are responding appropriately not much changes. 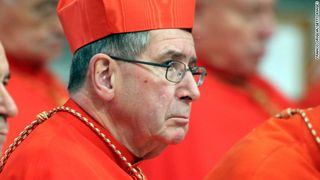 The local case in point for Kansas Citians, of course, is Bishop Robert W. Finn, who was pledged along with other American bishops to countenance no sexual predators in the priesthood but who nontheless was convicted in a court of law for failing to report a priest who was a suspected child abuser.

The more recent national case has to do with Cardinal Roger Mahony of Los Angeles (pictured here). The church recently released tons of documents that outlined the many failures to protect children that happened on Mahony's watch.

Then the current archbishop, Jose Gomez, released this statement: “The behavior described in these files is terribly sad and evil. Effective immediately, I have informed Cardinal Mahony that he will no longer have any administrative or public duties.”

On the surface it looked as if a church leader was holding someone accountable and enforcing a meaningful punishment.

But as David Gibson of Religion News Service reported in this piece, in the end, almost nothing changed. Mahony remains a priest in good standing with the Vatican. He had no "administrative" duties anyway. And life goes on as if nothing "terribly sad and evil" really happened.

Until the U.S. Conference of Catholic Bishops adopts a consistent approach to deal with the cover-ups some of its members have been guilty of in recent decades, people in the pews will remain suspicious or -- worse for the church -- will abandon the pews.

But so far such consistency is missing. And as I pointed out in this column for The National Catholic Reporter, bishops have failed to respond publicly to the convicted bishop in their midst.

It's way past time for all that to change -- for the good of the children.

A MUSLIM COLLEGE OPENS IN CALIFORNIA

The U.S., it's reported, now has its first Muslim college, Zaytuna College in Berkeley, Calif., which so far has just 31 students. If it follows the pattern of other such American institutions, it will be a "university" within a few years and also be sending out endless appeals to graduates for financial support. That's the American way.