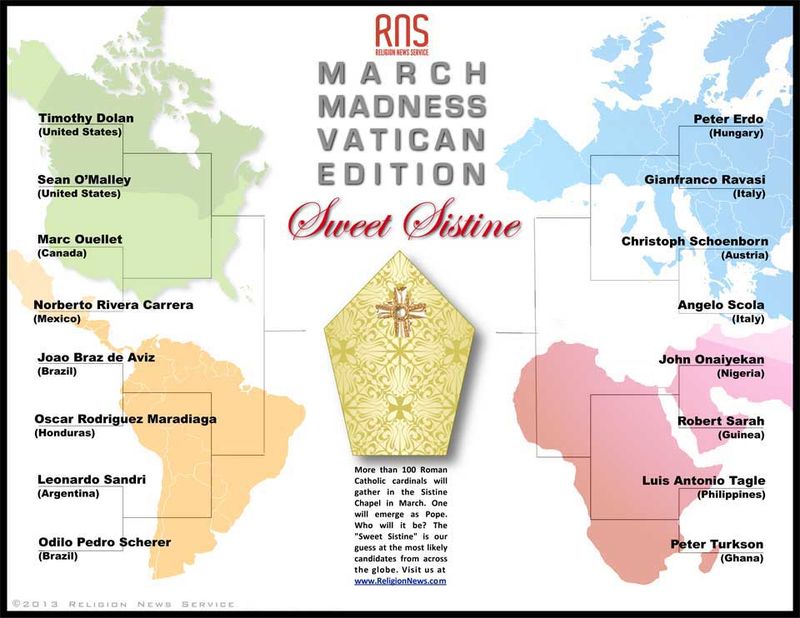 One of the problems with so much of religion is that it's humorless -- or at least many of its adherents are that way.

Which is one reason I love it when serious journalistic outfits like Religion News Service produce wonderful humor, such as the pope bracket seen here today, The Sweet Sistine.

RNS Editor-in-Chief Kevin Eckstrom and his staff do a great job covering many aspects of religion, but they also understand that sometimes it helps to laugh a little.

So print out your Sweet Sistine bracket and fill in the blanks. I won't give away my guess, but I will tell you that I have American Cardinals Timothy Dolan and Sean O'Malley both falling in the first round, which is funny in itself, given that RNS has them going against one another. (Another hint: Don't rule out Erdo and Scola -- or Turkson, for that matter.)

Also: Don't worry if, in the end, you prove to be not infallible. That's the human condition.

In yesterday's blog entry, I gave you a link to a New York Times column by Frank Bruni suggesting that a major problem for the Catholic Church is its requirement that its priests be celibate. Today I want to give you this thoughtful challenge to Bruni by a Jesuit, Francis X. Clooney, who makes a point or two I tried to point to at least indirectly yesterday. So are you with Bruni or Clooney? Or, like me, both?