As I was working with my pastor, Paul Rock, to prepare for this week-long Ghost Ranch class we're to co-teach in early April on congregational transformation, I ran across personal photographic evidence of what has happened not just to the Presbyterian Church (USA) but also to our culture in the last 50 or 60 years.

So first look at the top photo of my family when I was maybe six or seven years old. You see six Presbyterians there. Well, my father grew up a Methodist but became a Presbyterian when he married my mother in 1937.

And we're not just all Presbyterians, we're also entirely Euro-American. My father was full German and my mother full Swedish. (The group also includes Sitka, our Siberian husky, and Golddust, a cat filling my lap. That's as much diversity as we had.)

OK. Now slide down to the photo at the bottom here, taken last summer at a family reunion that included me and my three sisters and nearly all of our children and grandchildren.

The only Euro-American grandchildren pictured here are mine. Nearly all of my sisters' grandchildren (as well as my youngest sister's two children) are of mixed racial or ethnic heritage -- Japanese-American, Korean-American, Chinese-American, Filipino-American and African-American. To me, this beautiful photo looks like a family picnic attended by members of the U.N. Security Council.

And how many Presbyterians are in the bottom photo? Well, I suppose it depends on how you count. Only my youngest sister and I from the original four siblings in the top photo still are active Presbyterians. One of my older sister's children has been active in a Presbyterian Church. Add in my wife as another Presbyterian, though given her attachment to the Episcopal Church she sometimes calls herself an Episcoterian. But mostly the people in this photo are either among the "nones," meaning religiously unaffiliated, or they're still officially members of a faith community but inactive or they are attached to a different faith community, such as the Unitarian-Universalist Church.

Faced with this religious and ethnic reality -- well-reflected in my own family -- how do Mainline churches transform themselves now so they are doing useful and necessary ministry in a wounded world?

That's what Paul Rock and I will be talking about at Ghost Ranch. You certainly don't need to be Presbyterian to join us. But whatever your religious affiliation, if any, I hope you will sign up and spend a week in the beautiful red rock hills of northern New Mexico with us. 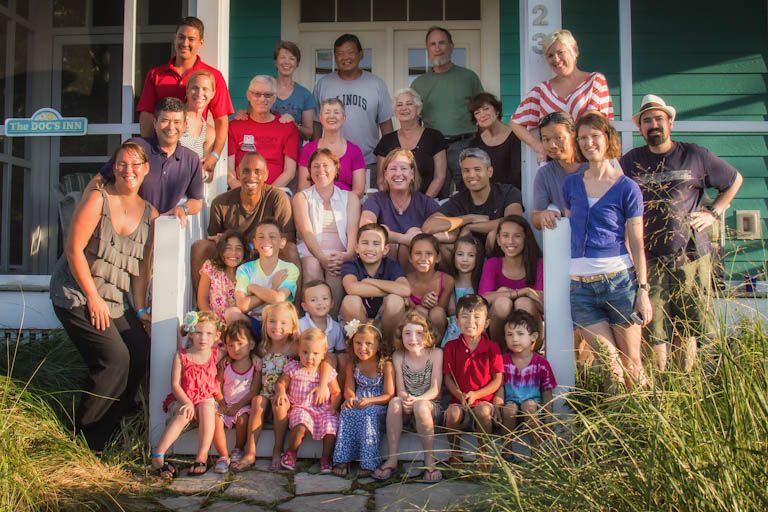 New York Times columnist Frank Bruni argues in this piece that the Catholic Church's insistence that its priests be celebate is foolish and reckless. Do you agree? Or do you see celibacy as a spiritual discipline that commits priests to be married, in effect, to the church? My view is that for some people celibacy is exactly the latter, but because, as Bruni argues, it demands too much, I would make it voluntary if I were in charge of the church (which, of course, I'm not). And neither are you. (And, yes, I see the evidence in the lower picture here today that no adult in my family chose celibacy.)