On Groundhog Day earlier this month, the 1993 film "Groundhog Day" again got lots of play not just from broadcast outfits but also through private viewings. 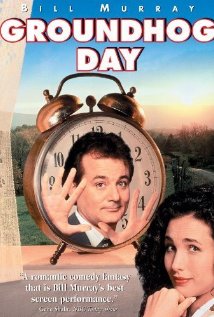 We didn't watch our copy of it this year in my house but we've done that in some years past.

One reason is that the film was shot in my hometown of Woodstock, Ill., which dressed up like Punxsutawney, Pa. So us former or present Woodstockians (or whatever you call us) have a special connection to the movie, which stars comic genius Bill Murray and actress Andie MacDowell.

I happened to be visiting Woodstock to see my mother when the film was being shot, and it was fun to see my little town pretending to be Punxsutawney.

When the movie was released, I was surprised at how good it was, how engaging. And my guess was that it would stand the test of time. Which it has.

So much so, in fact, that the March edition of The Atlantic has this intriguing piece in which James Parker argues, as the subheadline says, that the film should be recognized "as a profound work of contemporary metaphysics."

The film is, he argues, for the "seeker, spiritually curious, mystically a-tremble."

I suspect the author would not put the film in the top 10 of history's greatest religious movies, but something about it does, indeed, speak to our spirits, our sense of self -- often a sense of wounded self.

Sometimes the religious or spiritual themes in art aren't glaringly obvious. "Groundhog Day" is a good example. And sometimes when the themes are more subtle, the messages they carry are deeper and more prophetic. I see that in this film. And, just for the record, Woodstock was the perfect place to make a movie like this. It, too, has its religious themes, but they are less obvious than in, say, Mecca or Jerusalem.

It turns out that religious zealots around the world are threatening people who are competing in versions of "American idol." The mistake these zealots are making is that they take these shows seriously. Hmmm. They must be crypto-Americans.