If you've read my essay here on the blog about anti-Judaism in Christian history, you know about the long, shameful way Christianity has treated Jews. 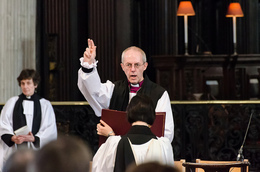 And if you've followed my writing over the years you know I've been a consistent adovcate for better interfaith relations, not only between Christians and Jews but among adherents of all faiths.

So it won't surprise you that I tend to stay alert to stories that touch on these subjects.

One such recent story has to do with the new Archbishop of Canterbury, Justin Welby, (pictured here) who has become the leader of the Worldwide Anglican Communion -- well, as much as anyone can lead such a widely spread and diverse group.

Welby, it turns out, has some Jewish ancestry, as this report notes. The story says that "Welby's father came from a German Jewish immigrant family named Weiler."

The Jewish tradition is that Jewishness is passed to children through their mother, not their father, so for Welby to be considered Jewish his mother -- not his paternal grandfather -- would have to be Jewish.

But that's not what's important here, at least to me.

Rather, Welby's connection to Judaism should be looked upon as an opportunity for deeper dialogue and better relations initially between Anglicans and Jews but, more broadly, between Christians and Jews.

An excellent chance for good interfaith dialogue and understanding has sort of inadvertently fallen into the hands of the Church of England. And I hope good use is made of the opportunity.

ANTI-TERRORISM AS A RELIGION

Is journalist Robert Fisk right when he writes that the war on terrorism is "the new religion of the West"? Sometimes I wonder. Has the U.S., unjustly attacked on 9/11 and before, fallen into al-Qaida's trap? See what you think.