People more closely attuned than I am to inside-Vatican matters will be better able to analyze the soon-to-end papacy of Benedict XVI (pictured here) and to walk through the possibilities to succeed him. 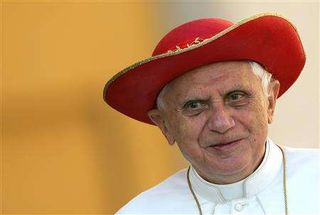 (Last November, I heard John L. Allen Jr. of The National Catholic Reporter talk about some of those possibilities, and I expect John will have interesting things to say about all of this in the coming days. Indeed, his first take on all of that is here.)

But I want to use some space here today to praise B16 for what many other popes have lacked -- a recognition that he is not indispensible. It has been some 600 years since a pope resigned. They all died in office. Which is ridiculous. Their refusal to face reality was a sign that they considered themselves so important to the life of the church that they had to stick around until their last breath.

No one is that important. And B16 not only recognized that but he acted on it, thus setting an important precedent for future popes who may otherwise be so arrogant as to imagine they must sit on the throne of Peter until they collapse lifeless.

I was disappointed that the previous pope, John Paul II, clearly struggling with Parkinson's disease in his later years, did not have the wisdom to resign. Not only that, but he also did not acknowledge the nature of his illness and let the church worldwide minister to him and walk with him through that pain -- as Cardinal Joseph Bernardin of Chicago had done earlier with his cancer.

So although I disagreed with Benedict on several matters, I have to agree with Michael Sean Winters of NCR, who wrote yesterday that Benedict "might well be the most thoughtful, cultured, deeply read public figure of our time." And I have to give Benedict high marks for knowing when to hang it up.

(By the way, the Religion Newswriters Association has put together this list of resources for journalists covering the pope's resignation. Maybe you'll find some of it useful.)

Before news of the pope's resignation broke yesterday, I had prepared the words below for today's entry, with the headline: Was this clergyman crazy?

So you get a double shot today. Share the bounty of beauty and wisdom with your friends.

Yes, this used to be the birthday of Abraham Lincoln until it got all kicked around and merged with George Washington's birthday and Presidents Day and whatnot. 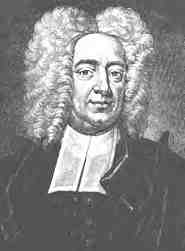 But I want to talk about a different birthday boy today, Cotton Mather (depicted here), born in Boston on this date in 1663. It is tempting to say that he was the Jerry Falwell or Pat Robertson of his time, but that would fly directly in the face of the point I'd like to make about Mather and his time.

His time was not our time. And as hard as we might try to recreate a sense of what it must have been like to live in pre-revolutionary America, it is next to impossible to do that.

All these years later it is easy for us to look back and wonder why in the world he would be a proponent of theocratic rule here in the New World. And we can wonder about his involvement in the Salem Witchcraft Trials and his advocacy of prosecution of witches.

I'm currently (and slowly) reading the fabulous four-volume series called Lincoln and His World by Richard Lawrence Miller, a historian who lives in Kansas City. And perhaps better than almost any historian I've read, Miller is able to give readers a deep sense of what Lincoln's world must have been like to live in. It takes incredibly detailed reporting based on meticulous research to be able to do that.

But even so, I am not a contemporary of Lincoln and thus can know (also only partially) only what my own era feels like, not Lincoln's.

So when we read about old religious leaders, such as Cotton Mather or a past pope, for instance, we would do well not to imagine that we can fully grasp the influences that shaped them. This is not to excuse Mather's position on witches or what seems now to be Lincoln's too-slow movement toward an abolitionist position on slavery.

But it is to suggest that if we wish to walk in another person's shoes, the other person must be a contemporary of us for us to get the clearest picture of what that means.