Today marks the start of the first full week of work for the 113th Congress, for which expectations could not be lower but which certainly has small shoes to fill -- those previously filled by the remarkably inept 112th Congress. 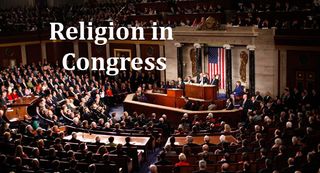 I don't know how this Congress will do, but thanks to work by the Pew Forum on Religion & Public Life and (Congressional Quarterly) Roll Call, we now know the religious makeup of this Congress.

The good news is that Congress slowly is looking a bit more like the rest of the population when it comes to religious affiliation. Diversity, in other words, is spreading.

In the 113th, for instance, we have the first Buddhist to serve in the Senate (and a total of three Buddhists in Congress) and the first Hindu to serve in either House. We also have the first member not just to decline to reveal a religious affiliation but to declare himself not to be affiliated at all. You throw in 33 Jews, 15 Mormons, two Muslims and a Unitarian Universalist, and pretty soon you're talking the shadows of real diversity.

Having said all that and having linked you to details of this information, let me say again that there is no religious test for public office under our Constitution and that if you ask me the only question about religion that's fair to ask a candidate is how his or her faith might affect public policy and behavior in office.

But. But. I do wish you to notice that we Presbyterians make up 8.1 percent of Congress even though we're only 3 percent of the population. And of all the statistics you've ever read about Congress, that's one of them.

Now here's some good news. For more than a decade in San Antonio, Catholics and Jews have gathered in a joint Hanukkah celebration. When we begin to appreciate each other's rituals and traditions is when interfaith connections begin to make a real difference and move us a step closer to peace.