As anyone who has seen a traveling exhibit of the Dead Sea Scrolls knows, these ancient copies and fragments of scripture and related writings are fascinating and revealing. 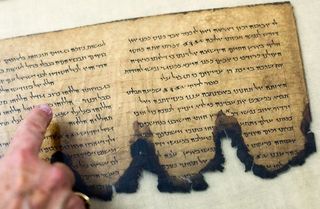 I saw an exhibit of them in Chicago years ago and then the more recent exhibit just a few years ago at Union Station in Kansas City.

Now you can view them all for free on your computer.

As the announcement from the director of the Israel Antiquities Authority says, "The Israel Antiquities Authority (IAA) is very proud to present the Leon Levy Dead Sea Scrolls Digital Library, a free online digitized virtual library of the Dead Sea Scrolls. Hundreds of manuscripts made up of thousands of fragments – discovered from 1947 and until the early 1960s in the Judean Desert along the western shore of the Dead Sea – are now available to the public online. The high resolution images are extremely detailed and can be accessed through various search options on the site."

One of the lessons scholars have learned (or at least had affirmed) from studying the scrolls is that Judaism at the time was terrifically dynamic and robust. Indeed, it is more accurate to speak of First Century Judaisms than the singular Judaism. Various sects and divisions were clashing against each other in different ways. And into that mix came the Jesus Movement, which long decades after the death and resurrection of Jesus officially separated itself from Judaism and became Christianity.

So dig around on the scrolls' site today to keep them, well, alive.

(The image here today is from The National Geographic and can be found here.)

And speaking of the Dead Sea Scrolls, CNN has done this piece about one of the five people in the world assigned to conserve them. Talk about needing a deft touch.