Anyone who has been part of a faith community for more than a week knows that they can be slow to change. In some ways, that's a good characteristic. It prevents wild shifts in any theological or cultural wind that comes along. 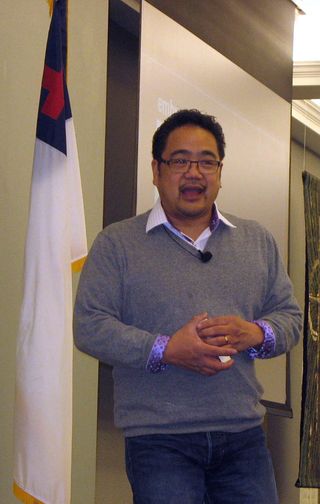 But this resistance to change also can prevent a congregation or an entire religion from adjusting in ways that make sense so that its message can be heard in a different time and setting.

The Rev. Bruce Reyes-Chow (pictured here) was talking about this a bit the other day at a gathering sponsored by Heartland Presbytery, to which my congregation belongs. Bruce, a former parish minister in San Francisco and former moderator of the General Assembly (national governing body) of the Presbyterian Church (USA) was the keynoter at the "Embrace Hope" event at Village Presbyterian Church in Prairie Village, Kan.

He was asking us where, in our own churches, we find the bottlenecks.

His own answer was, I think, a bit surprising to folks.

"There were so many times as the pastor of a church where I had to say to myself, 'Where's the real bottleneck in what's going on in this congregation?' Pastors love to blame elders. And elders love to blame pastors. There's plenty of blame to go around.

"But I actually do think that in most congregations the pastor is the one who is the bottleneck."

Again, there are times when a pastor being a bottleneck is good for the congregation. He or she sometimes can prevent bad ideas from getting implemented.

But I've certainly seen instances in which pastors stopped good and reasonable progress because they feared losing control. And that's an arrogance that churches, synagogues, mosques, temples and other houses of worship cannot afford.

We Christians believe that in the long run the Holy Spirit will break through all such barriers, but if pastors are working in harmony with the spirit of God instead of worrying about their own career moves or whether they'll be liked by everyone, the Spirit doesn't have to work so hard.

YES, AND THE SCORE WILL BE XXXIV TO XXI

More than a quarter of Americans believe God will determine who wins the upcoming Super Bowl. Are these the same people who believe Barack Obama is a Muslim or do we have more wingnuts than we like to imagine?