The other day as I was reading a yet-to-be-published book about the resurgence of antisemitism (I plan to review the book later for The National Catholic Reporter), I was struck by something I'd not given a lot of thought to. 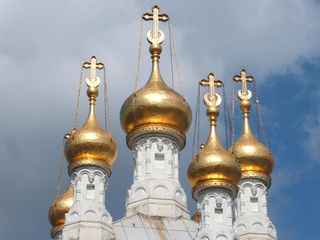 In one of the essays in the book, a professor of Judaic studies at a Big Ten university says that though the Catholic Church, through its 1965 document called Nostra Aetate, has "lifted the burden of guilt of deicide from the Jews," the Orthodox church has not done so.

As most of you know, the charge of deicide historically has meant that the church has thought of Jews -- and sometimes publically pronounced them Jews to be -- "Christ killers." (For my own essay on anti-Judaism in Christian history, look under the "Check this out" headline on the right side of this page.)

Although I've long been aware of the fact that the Nostra Aetate document changed the Catholic church's position on this matter, I hadn't paid much attention to what the Orthodox world has had to say about this.

I use the term Orthodox world as a reminder that there is much less central authority among Orthodox Christians than there is among Catholics. So although the Greek Orthodox, Russian Orthodox and Serbian Orthodox (and other Orthodox) churches are related theologically, each mostly speaks for itself.

So as I began to look into anti-Judaism and the Orthodox Church, I discovered this recent piece in which the Russian Orthodox Church is being investigated for -- what else? -- antisemitism.

(Just to be clear, anti-Judaism is theological in nature. It charges the Jews with such things as failing to recognize Jesus as the Messiah. Modern antisemitism, by contrast, is more racial in nature, though it has some of its roots in traditional Christian anti-Judaism. Modern antisemitism repeats such calumnies as Jewish greed and their alleged plot to rule the world.)

In the story to which I've linked you, the Russian Orthodox Church is charged with such antisemitic acts as promoting some of thinking in the long-ag0-proven-fraudulent Protocols of the Elders of Zion, which, 100 years after its publication, still gets used and sold as a legitimate piece of work about a made-up Jewish world conspiracy.

Well, if the Russian Orthodox Church is allowing followers to think that the Protocols is a legitimate piece of research and reportage, clearly something antisemitic is going on there. But I hope to find the time to dig deeper into the question of whether the Orthodox have ever issued a statement similar to Nostra Aetate or whether something has prevented that. Let me know what you know about this.

Speaking of The National Catholic Reporter, as I was at the top of today's blog entry, did you see that Bishop Robert W. Finn of the Kansas City-St. Joseph Diocese disagrees so much with some of NCR's editorials that he thinks the paper should not use the word "Catholic" in its name. See? That's one more reason Finn, convicted in court of failing to report suspected child abuse, should no longer be bishop. No matter what the subject -- even if he's expressing a legitimate opinion about a legitimate matter -- people's reaction will be something like: Why didn't you devote this much attention to protecting children from abusers? The man has lost credibility and his continued presence damages the church. In a recent column I wrote for NCR, I took Finn's fellow bishops to task for not publicly urging him to step down.