﻿When I was a boy my parents one year (1954?) took my sisters and me to the Chicagoland Music Festival at Soldier Field. 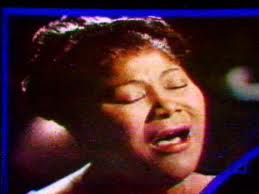 In addition to hearing such pop singers as Eddie Fisher (once Mr. Elizabeth Taylor), we heard the astonishingly powerful voice of Mahalia Jackson (1911-1972).

I think about her this time of year because she died on Jan. 27, 1972. She was one more example -- indeed a prime and darn good one -- of the link between American jazz and religion. She was at home in both worlds and managed to weave them together in strong and moving ways.

I'm on a bit of a retreat this weekend, so I'm not going to write a lot here. But I wanted to connect you to this great site where someone has collected a bunch of Jackson video on YouTube.

It will give you a good sense of her range and abilities and how she connects faith and music.

Who, if anyone, is today's Mahalia Jackson? Do you have a favorite?

A new survey finds seven of the 10 least "Bible-minded" cities in the country are in the East, with a concentration in New England. No. 1? Providence, R.I. Isn't Providence just another name for God? So does this mean even God doesn't read God's word?