In Christian theological circles, theories of the atonement are like noses -- everyone has one. Same with theodicies, by which I mean explanations of why there is suffering and evil in the world if God is good. 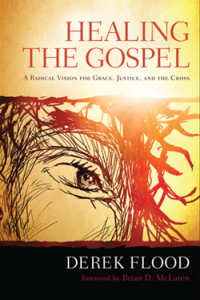 And here's the other thing about both theories of the atonement and theodicies -- eventually they all fail. Or, as Donald G. Bloesch writes in his book Essentials of Evangelical Theology, "No theory in and of itself exhausts the truth in the mystery of the atonement."

And although it's true that all theories finally fail, some fail more spectacularly than others. Indeed, in his new book, Healing the Gospel: A Radical Vision for Grace, Justice, and the Cross, Derek Flood makes the persuasive argument that what's often called the penal substitutionary theory of atonement -- which has many followers and has since soon after St. Anselm of Canterbury proposed its immediate predecessor in the 11th Century -- is misguided and biblically out of touch. Beyond that, he argues, this theory misses the message of the Gospels, which is one of grace, reconciliation and restorative -- not retributive -- justice.

The problem is that if you get a theory of the atonement horribly wrong, you miss much of the point of the whole Christian religion. Which is to say that by sticking with the penal substitutionary theory of atonement, Flood argues, people struggle "with their feelings of shame and worthlessness, desperately longing for grace, longing for God's assurance and love, yet continuing to assume that their broken view of an angry, condemning, punishing God was the correct view, the biblical view. What I want to propose is that this is not in fact what the New Testament teaches at all."

Later Flood makes the point that "Jesus' entire ministry of healing the sick, caring for the poor, and forgiving sinners can be said to be a demonstration of restorative justice."

So what does this mean for commonly heard theology? That Christians should set aside the construct that Jesus had to die to appease the wrath of a God angry about our sins. That image grows out of the penal substitutionary theory of atonement.

Flood argues that a more biblical theory would describe the crucifixion as the ultimate act of love on God's own part, an act that demonstrates to us how much God loves us and, thus, restores us to a right relationship with God.

In effect, adopting this more biblical approach does away with the need to scare people by telling them they're condemned to hell unless they claim Jesus as their personal lord and savior. That's punitive justice, if it's justice at all. It gets it backward, thinking that God loves us because Christ died for us whereas the biblical way to say it is that Christ died for us because God loves us. Restorative justice seeks to create a loving relationship between us and God.

This is the kind of book that adult study groups in churches would do well to read together. It's time to thank Anselm for his thoughts and now set them aside in favor of a theory of atonement (no doubt still incomplete) that is rooted in the primary message of love in the Gospels because, as Flood notes, "restoration is the central plot line of the New Testament."

Somebody swiped a pastor's brand new iPad while the minister was downloading a copy of the Bible. All this happened at McDonald's. In the spirit of walking the second mile with someone, I hope the clergyman shouted after the thief, "Do you want fries with that?"