The constitution of the Presbyterian Church (USA), of which my congregation is a member, has two parts, the Book of Confessions and the Book of Order. 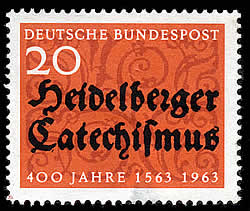 Some parts of both are pretty good cures for insomnia. And, no, "confessions" does not mean it's a list of the sins the church and its members have committed. Rather, it refers to statements of what Presbyterians believe.

So the first part of the constitution, the Book of Confessions, contains what we call the "essential tenets of the Reformed faith." Here Reformed refers to the Reformed Tradition, whose theological parents are such people as John Calvin and John Knox.

The confessions, or statements of faith, are always considered secondary to the Bible in terms of being authoritative. So if some part of the confessions seems to be in tension with an educated reading of scripture, the Bible wins.

I mention all this to take note of the fact that one of the confessions in the Book of Confessions, the Heidelberg Catechism, was first published on Jan. 19, 1563, meaning it is turning 450 years old this weekend. It first appeared in the section of today's southwest Germany known as the Palatinate, which is where, at the time, the Holy Roman Emperor resided. The confession was written by two young men of Heidelberg, Zacharias Ursinus, a professor, and Kaspar Olevianus, a preacher.

The Heidelberg Catechism grew out of a dispute between Lutheran and Reformed  Protestants over how to understand what happens in the sacrament of the Eucharist, or Communion. The catechism tried to word things in such a way as to satisfy everyone. I know. Good luck with that.

Each one of the 11 confessions in the Book of Confessions somehow represents its time and background, for as time goes on the people of each era feel called to express their faith in new words, though with continuity so that the past is neither forgotten nor rejected. So perhaps the most remarkable thing about all these confessions, including the Apostles and Nicene creeds, is that there is amazing consistency among them.

At any rate, next time you're in Heidelberg, tip one for the old catechism, which continues to speak to the church 450 years after its first publication.

It turns out that Kansas City's Adam Hamilton, founding pastor of the United Methodist Church of the Resurrection in Leawood, will be preaching at the National Prayer Service, a presidential inauguration event. The right guy for the right job. I'm betting Adam will knock it out of the park. But hey, Adam, no pressure.