The human soul can be -- and clearly is in many cases -- a casualty of war. 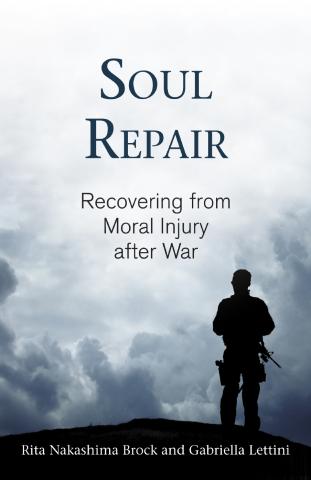 It can be morally injured, and that's a wound that can be difficult -- sometimes impossible -- to repair. That's one reason we see such high rates of suicide among military veterans.

What is moral injury? Here a definition from a new book by Rita Nakashima Brock and Gabriella Lettini, Soul Repair: Recovering from Moral Injury After War:

"Moral injury results when soldiers violate their core beliefs, and in evaluating their behavior negatively, they feel they no longer live in a reliable, meaningful world and can no longer be regarded as decent human beings. They may feel this even if what they did was warranted and unavoidable."

The book seeks to highlight a new effort through Brite Divinity School in Fort Worth called the Soul Repair Center. Co-author Brock is co-director of the center, which seeks to support recovery from moral injury in several ways.

As the authors write in this new book, "There is a boot camp to prepare for war, but there is no boot camp to reintegrate veterans to civilian life. They were taught reflexive fire shooting, but not how to recover a shredded moral identity."

No doubt it may be easier to fight in a war that one considers just and necessary. World War II often is seen by Americans as such a war. Yes, men and women saw and did desperate things in that war, but at least there was some sense that the forces of civilization were battling the forces of destruction. Which is why WWII often is referred to as the good war.

But in such wars as Vietnam and Iraq -- especially when many members of the civilian population viewed them as unjust and even immoral -- it is much easier for members of our military to feel a sense of impropriety, of doubt, of moral exposure and compromise.

Whatever the cause of moral injury, it's something that has been ignored for a long time. The Veterans Administration and others connected with our military now are beginning to pay more attention to it, and this book (full of fascinating stories about real people in real wars and afterward) and the Soul Repair Center at Brite should go a long way toward helping the general populace grasp the problem and some possible solutions.

AFTER THE CHIEFS' CALAMITY

If football is in some sense the nation's religion, would it make sense now to promote a reformation? It's one of the many questions to be kicked around in the aftermath of the murder-suicide over the weekend involving one of the Kansas City Chiefs' players. It's way too soon to somehow blame football itself for this catastrophe, but maybe it takes something like this to convince us to reassess the commitment that so many people have to this brutal sport -- a commitment that in many cases is more profound and dedicated than the commitment many fans have to a true religious tradition. Sport can teach many good things, and I love many different kinds of sports. But this disaster may provide an opportunity to think through what matters and what is simply commercial or cultural fluff.