As you may know -- and as my co-author (Rabbi Jacques Cukierkorn) and I report in They Were Just People: Stories of Rescue in Poland During the Holocaust -- more than 90 percent of the almost 3.5 million Jews living in Poland at the outbreak of World War II perished in the Holocaust. 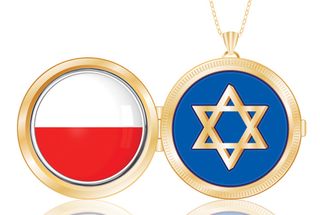 Many of the Jews who survived the German-built death camps left the country or went underground when, on July 4, 1946, (well after the end of the war) a pogrom in Kielce, Poland, left dozens of Jews dead. And most of those still around when Poland's Communist government instituted antisemitic measures in the 1960s also left or disappeared.

Today, however, some Jewish life has returned to Poland. Estimates of the number of Jews in Poland today vary from a few thousand to 12,000 or 15,000, but I'm not sure anyone really knows.

And not only has Jewish life (restaurants, festivals) returned, but some people whose Jewish parents or grandparents felt forced to convert to Catholicism are rediscovering their Jewish roots and returning to the religion of their ancestors.

This story from Tablet magazine is the latest update on how that process is going.

Jews have been in Poland for some 500 years and at first were welcomed there by the ruling authorities. But Poland also has developed a deserved reputation for antisemitism, though that, too, is changing -- especially as more young people around the world recognize the reality that it was the Germans, not the Poles, who built the six death camps in Poland in World War II and that the Germans murdered not just Jews but also many members of the Polish intelligentsia.

(The illustration here today is by Ivy Tashlik; original photo from Shutterstock. I found it at the site of the story to which I've linked you.)

P.S.: Speaking of taking a trip, I'm on one for a few days and, thus, won't be posting a second item here as I usually do until I return.