The question predates Pontius Pilate, of course, but he's the one many of us think of when we hear someone ask, "What is truth?" 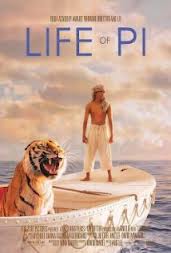 Pilate is quoted as asking Jesus that question in John 18:38.

The same question, in a way, is central to the "Life of Pi" movie I had a chance to see earlier this week in an advance showing before its current release.

The film no doubt would have great appeal without the underlying question of truth just because of the compelling story and the phenomenal production values (isn't that the term real movie reviewers use to talk about cinematography and special effects?).

But for me the most engaging part of the film had to do with the question of whether a story -- any story -- can be true even if it is not historically accurate, at least by the standards of how we do history in the 21st Century.

In the end, in both stories, he's the only survivor, the only one to tell the tale.

The survival story is preceded by the story of Pi's younger boyhood, when he learns to appreciate the ways several different religious traditions describe truth. It's a wise setting to the later story and in fact is crucial to understanding the film's central message about truth, history and myth.

One of my clergy friends likes to say about certain passages in the Bible, "I don't know if that's historically accurate, but I know it's true."

That's the approach this film urges on us. And it's one that, were it widely adopted, would avoid much of the sectarian violence that occurs in the world between and among people who differ about how to read holy writ.

(One of today's truths is that it's the birthday of my oldest sister. My gift to her is this blog entry, which, for her, I'm calling her Birthday Pi.)

ON NOT BEING DEAD

Our Buddhist friends remind us regularly to be "mindful." Which means, of course, to pay attention, to notice, not to miss the moment. It's hard to find mindfulness better expressed than in this lovely Thanksgiving Day essay published in yesterday's New York Times. So give yourself the gift of extending Thanksgiving by one day and read it.