As we approach America's biggest annual religious ritual -- Christmas shopping -- I think perhaps it's time to update some passages of the Bible so that they more accurately reflect the degraded values of our culture. 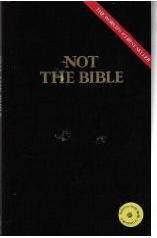 After all, the Jewish and Christian scriptures are increasingly reflective of values the American culture has rejected in favor of material possession, a worship of celebrity and an idolizing of the Middle Class.

Sticking with Matthew, here's the revised 6:28: "And why are you not anxious about clothing? Consider the lilies of the field, how they grow: they neither toil nor spin, which is why they're never on the cover of GQ or Vogue."

And one more from Matthew, a revision of one of the Beatitudes in 5:3: "Blessed are the Middle Class in spirit, for theirs is the attention of the candidates."

Moving to the Hebrew Scriptures, we turn to Exodus 22:25. The materially revised version now says:  "If you lend money to any of my people with you who is poor, you shall bundle the loans into a marketable derivative that will allow the eventual owner to forclose within a year."

Finally, let's redo Deuteronomy 15:7: "If among you, one of your brothers should become poor, having dropped out of the Middle Class, you shall harden your heart and shut your hand against your poor brother, except that you might tell him how to sign up for food stamps."

Well, there are many more passages from various holy texts that need similar revision to reflect our culture's visceral disdain the poor, but now that I've started you on the process of change, perhaps some of you can take up the task.

While we're revising scripture for fun, satire and cultural commentary, Pope Benedict XVI would prefer we not mess with the story of Jesus' virgin birth. In his new book, being published today, The Infancy Narratives - Jesus of Nazareth, he argues that the story of the virgin birth is an "unequivocal" truth of faith. I haven't yet read the pope's new book, so I'll reserve judgment. But the best commentary on the infancy narratives I've ever read is by the great (and now late) Catholic scholar Raymond E. Brown, The Birth of the Messiah. In fact, I'd recommend you read Brown before you read B-16.