I have not yet seen the new movie about Abraham Lincoln that is getting rave reviews, though I intend to. 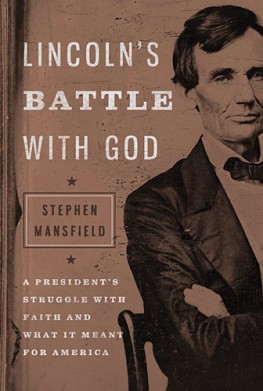 But as everyone talks anew about this fabulous, complex, magical man, I want to tell you about Lincoln's final words -- at least some believe they were his final words because they were reported to be that by Lincoln's wife, Mary, who sat next to him in Ford's Theater the night he was assassinated.

Beliefnet.com has offered readers this excerpt from a just-released book about Lincoln by Stephen Mansfied, Lincoln's Battle with God (a book I've not had a chance to read).

Mansfield, based on words later reported by Mary Lincoln, reports that as the play was going on, the president was whispering to his wife about some ideas on how they would spend the future. After the war and his term, Lincoln said to Mary, according to this account, “We will not return immediately to Springfield. We will go abroad among strangers where I can rest.”

Where did Lincoln have in mind? Again Mansfield:

"'We will visit the Holy Land,' Lincoln continued, leaning toward Mary so as not to disturb the others."

Then Mansfield reports that Lincoln added these words: “We will visit the Holy Land and see those places hallowed by the footsteps of the Savior. There is no place I so much desire to see as Jerusalem.”

Mansfield acknowledges there are reasons to doubt the veracity of these final words, but he quotes several experts as saying they believe the words to be true.

I was privileged myself this past April to see Jerusalem again, and it is, indeed, a privilege. I'm glad not to be there just now in the midst of more military turmoil. But let's all hope that some kind of lasting peace can settle on Jerusalem -- and all of the Middle East with justice for all people there.

(Tuesday evening addition: Just saw the movie. Fabulous. But in the film Lincoln delivers something like the Jerusalem line not at the theater but in an afternoon carriage ride with his wife.)

LEARNING ABOUT THE SIKHS

Sikhs, in the aftermath of the terrible murders at a Sikh temple in Wisconsin earlier this year, are trying to educate Americans about who they are, as this LA Times story shows. Good. Almost nothing good ever comes out of ignorance.