Woodstock, Ill. -- The conventional wisdom of our time is about time itself. It says time flies, and with increasing speed. 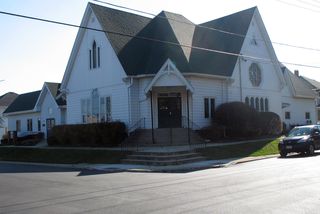 This can lead to what Alvin Toffler described in his 1970 book as "future shock." We become incapable of staying up to speed on things and we seek ways to mark where we've been so that we can retain some semblance of memory.

I was thinking about all that here in my hometown the other day when I passed by the church building that housed my congregation when I was growing up. Indeed, it was home to First Presbyterian Church (founded in 1846) from the early 1880s until 1996.

At that point, the congregation built a new structure on the north edge of town. And eventually a Unity congregation took over the old building.

People of faith sometimes find change hard to handle. They often want things to remain as they are, though everyone knows that is not the way the world works.

Still, there is something that stings my heart as I stand outside of this church building and remember my Sunday school days here and then recall the funerals held here for both my father (1992) and my mother (1996) and the wedding here of one of my sisters.

My head knows that what matters is not the building but the collection of people who make up the church, and I still have friends in the congregation that now meets in its new structure. But this old building once was sacred space for me, and it's not easy to let that go.

And yet it gives me some comfort to know that a new collection of people -- though with a theology different from mine -- is living in this old building and discovering it to be sacred space, too.

A theology of place no doubt is less important than a theology of the community, but that doesn't remove my odd sense of longing for the old place.

Washington Post columnist Matt Miller asks this on-target question: "Why is our moral instinct so different when it comes to natural disasters like Sandy as opposed to slow-motion man-made disasters, such as the fate of millions of poor children languishing in failing schools?" Well?

P.S.: I've written a fair amount in the past year or two about Shari'a (most recently here), sometimes called Islamic law, and why the U.S. has little reason to fear it. A University of Kansas law professor, who has written a big book explaining Shari'a, has been teaching about Shari'a to military personnel at Fort Leavenworth in Kansas. Here's an intriguing story about that from Kansas City's NPR station, KCUR-FM.