Many of you know that Rabbi Jacques Cukierkorn is co-author of my latest book, They Were Just People: Stories of Rescue in Poland During the Holocaust. 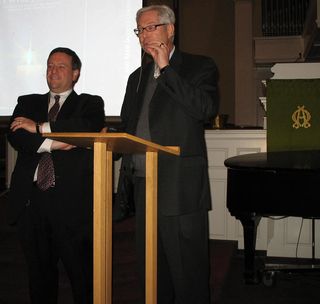 And you may know he's the spiritual leader of Temple Israel of Greater Kansas City.

But did you know that he's becoming internationally known for helping members of crypto-Jewish families (meaning either hidden Jews or people whose families once were Jewish) return to Judaism?

This work, primarily centered in Central and South America, was documented in a film a few years ago called "The Longing: The Forgotten Jews of South America."

But now the Israeli newspaper Haaretz has done this engaging feature story about Jacques' conversion work. (To read the whole thing, you may have to register, but that's free.)

As the story's author, Judy Maltz, reports, "In the 18 years since his ordination, Cukierkorn has overseen roughly 500 conversions, mostly of individuals in Latin America who maintain they are the descendants of 'anusim,' or 'forced converts.'"

Jacques described all of this a couple of weekends ago to a Jewish congregation in Evanston, Ill., when he and I were in the Chicago area to give talks about our book. He called his remarks at the Shabbat service "Cowboys and Indians, Priests and Prostitutes," because such people have been among those he has converted to (or back to) Judaism.

Jacques has created an organization called Brit Braja through which to do this work. This is pretty a remarkable undertaking, helping people find their spiritual home, one that in many cases was ripped away from their family in previous generations in times of profound anti-Judaism and antisemitism.

(The photo here today shows Jacques and me giving a recent presentation on our book at First Presbyterian Church of Arlington Heights, Ill.)

LOGGING ON WITH JESUS

If one of your regular password for computers and such is "Jesus," you might want to think again. It turns out that's one of the most commonly used passwords around and it's easy to guess, exposing you to identity theft. Wonder what password Jesus might us. "Me"?

Exploring Advent with Luke, by Thomas Clayton. It's a common spiritual discipline for Christians to read daily or weekly devotional writings in both Advent and Lent. It's a way of focusing on what each liturgical season is about and reconnecting with the core of one's faith. The author of this book of weekly readings for Advent, which Christians are about to enter as they move toward Christmas, is the rector of an Anglican church. He pays attention here to the story of Jesus' birth as it's told in the Gospel of Luke, focusing particularly on the questions that some of the main characters in the story ask. He then proposes questions for readers to ask about their own life of faith. This is the kind of engaging book that lends itself to small group reading and conversation.