When I recently wrote here about a newly discovered papyrus fragment in which Jesus seems to be talking about his wife, I of course thought a bit about who that person might be if, in fact, Jesus had a wife. 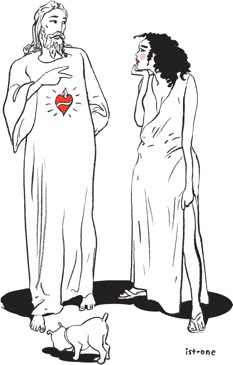 But I didn't take the next step and write a piece as if it were written by her. I wish I had now that I've read this really funny piece in The New Yorker by Paul Rudnick.

Read it first and then come back here.

OK. The point I want to make by offering you Rudnick's piece is simply this: Religion needs to lighten up.

We who are people of faith usually take ourselves (and our positions) far too seriously. We mistake genuine humor for sacrilege and pull back in horror sometimes.

And why? Do you not imagine that God has a sense of humor? Just look around you. Look at the way a pigeon walks, for instance. Did God not bust out laughing when the Creator decided to connect each pigeon's neck to its butt?

Did God not at least smirk at the idea that when it gets really cold outside the trees get naked? And don't get me started on sex.

The God I choose to worship is joyful, funny, imaginative, even while being holy, holy, holy.

The point of the kind of satire Rudnick has written -- and, indeed, the point of almost all religious satire -- is not to denigrate God but, rather, to say something about humanity.

Loosen up, folks. These are the jokes.

(The image here today is from the same New Yorker piece to which I've linked you above.)

MORE THAN JUST THE DAMN YANKEES

A new poll shows most Americans are fine with athletes publicly displaying their attachment to religion. But, of course, if those same athletes cause people's favorite teams to lose the fans will damn them to hell -- 'cuz that's how we roll in America.