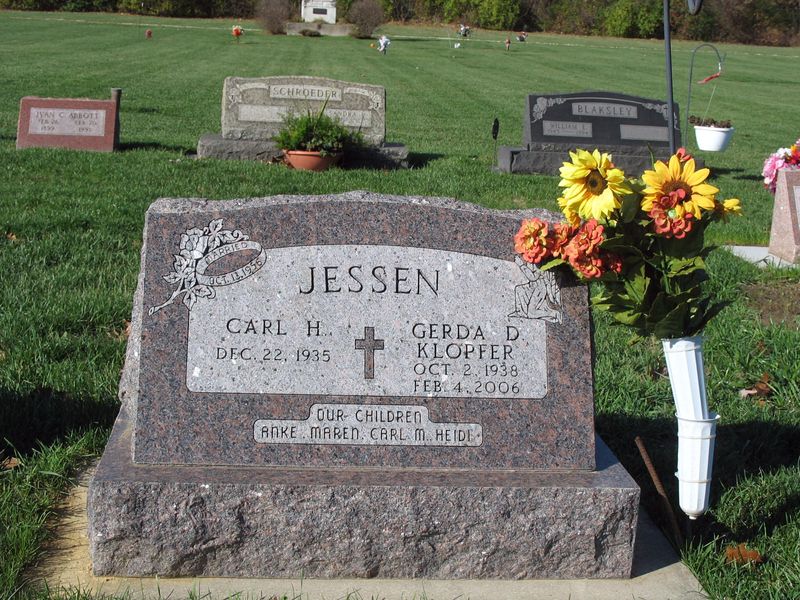 Woodstock, Ill. -- On this spooky holiday, I will take you to a grave yard, but not to scare you. 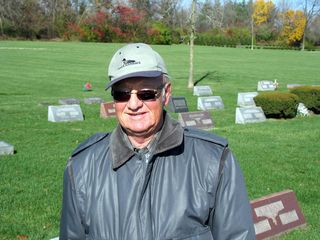 We're going to Oakland Cemetery here in my hometown, where my parents are buried. I was here on Saturday of this past week visiting their grave and looking around at the graves of many other people I know (including Chester Gould, who created the "Dick Tracy" comic strip; there's an image of Tracy on Chet's headstone).

As I slowly drove along one of the narrow gravel roads between sections of headstones I saw a man standing all alone in front of a tombstone. From my view, it looked as if the name on the stone said "Jensen," and I knew some Jensens from my childhood, so I stopped and walked over to the man to ask if the couple buried there were his kin.

But when I got up closer, the name turned out to be Jessen, not Jensen, and so far only the wife had died. The husband, Carl, born late in 1935, was still alive. And Carl was the man standing there.

I introduced myself by name and he asked if I had a brother. No, I said, just three sisters. Well, he said, he once had someone named Tammeus work for him.

Then it hit me. Carl Jessen was one of my first bosses. He owned the Early American Bakery in Woodstock, and Carl paid me $5 each Saturday morning to help clean the bakery. Well, as I reminded him at the cemetery, he paid me $5 but he took out 18 cents for Social Security. That was nearly 50 years ago, and here we were together again in a cemetery.

So Carl and I caught up. A native of Germany, he now splits his time between Woodstock and Germany, where -- since his wife Gerda's death in 2006 -- he has reconnected with his girlfriend from his teen-age years.

But when he's in Woodstock, he regularly comes to Gerda's grave.

"I'd give a million dollars to have her back," he told me.

So while much of the country today is making fun of old Mr. Death because, well, that's what we do on Halloween to keep from having to think about our own real deaths, some folks, like Carl, are continuing to mourn the death of someone vital in their lives.

Carl Jessen was (and is) a good, hard-working fellow who came to the U.S. as a young man and who made a life for himself here, a life I was a tiny part of for a time.

And had I not bothered to go visit the burial site of my parents, I'd never have reconnected with Carl. One more reason to treat death with respect.

Was Hurricane Sandy God's will? Well, religion scholar Stephen Prothero has some good thoughts about that question that you can read here. By the way, if we think we fully understand God's will, we're almost certainly off the mark.

P.S.: In yesterday's blog I wrote about faith communities finding their sea legs in downtown settings. For a really good lecture on that subject by a wise man, click here. You'll get to the Disciples of Christ Historical Society site.

ANOTHER P.S.: From 7 to 9 p.m. this Thursday, Nov. 1, and on Thursday, Nov. 8, I'll be teaching an essay writing class at The Writers Place in Kansas City. Details are posted on the TWP website here (for non-members) and here (for members). Hope you can join us.

THIRD AND FINAL P.S.: It now is possible to sign up for the weekend seminar, "Should We Risk Forgiveness?" that Doug Hundley and I will teach April 26-28 at the beautiful Kirkridge Retreat Center in Pennsylvania. For details, click here. And come join us. It should be a profoundly moving weekend.

OH, WHAT THE HECK, A FOURTH P.S.: My latest National Catholic Reporter column now is online. To read it, click here.