Over the last several decades, many biblical scholars and theologians have been focusing on the idea of empire and how that oppressive governing structure affects our understanding of God and the followers of religion. 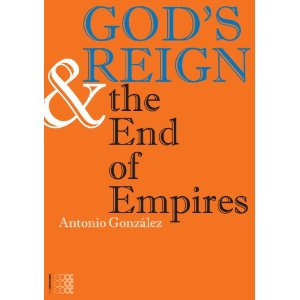 It's been a rich vein to mine.

Among the scholars exploring the concept have been Richard Horsley ( read his: Jesus and the Power; Jesus and Empire; Paul and Empire) and Warren Carter, who used to teach at St. Paul School of Theology in Kansas City (read his: Matthew and Empire; The Roman Empire and the New Testament).

One of the consistent themes in this work is that human empires inevitably oppress and imprison people while the reign of God, or what Jesus called the Kingdom of God, liberates people.

The New Testament, especially, comes into much clearer focus when the reader remembers that at the time of Jesus the Jewish people were straining under the thumb of the Roman Empire. Nearly all of the teachings of Jesus in some way stand against the crushing and opposing values of that empire.

That theme is explored in illuminating depth in a new book from Convivium Press: God's Reign and the End of Empires, by Spanish scholar Antonio Gonzalez.

What I especially liked about this book is the willingness of the author to stare at the inherent structural defects of capitalism (yes, other economic systems have such defects, too, often in abundance compared with captialism). This is a stark reminder that the primary allegiance of people of faith cannot be to any economic system but, rather, must be to God and the world of justice, compassion, mercy and love that God wills for humanity.

Gonzalez, who has taught theology in Spain and Guatemala, is a member of a Mennonite community. His writing reflects some of the concerns of Liberation Theology, which tends to focus on what theologians call "God's preferential option for the poor."

He is particularly adept in describing what the Christ event means in all of this:

"God's identification with Christ implies God's solidarity with all the victims of history. God has, in Christ, personally experienced their fate. Any intervention by God to save the Messiah from death would certainly have been a declaration, over against his accusers, that Christ was just. But it would also have meant that all other outcasts of history were not worthy of such an intervention. . .God's identification with Jesus, however, involves a true and total rehabilitation of the victims before God."

It is, of course, possible to move from a religious critique of empires and economic systems, especially capitalism, toward equally or more destructive systems, such as Marxism. But that doesn't relieve people of faith from trying to understand what it means to have a primary allegiance to God's reign and not to any human empire. And this book can help with that task.

Note: I'm in Chicagoland for a few days with Rabbi Jacques Cukierkorn giving talks about our book, They Were Just People: Stories of Rescue in Poland During the Holocaust. Until I return early next week I won't be adding a second item to these posts.