The very existence of the word Islamophobia suggests that Islam has enemies. And, for sure, there are bigots who claim that Islam is the religion of the devil and who make other and similar radical assertions. 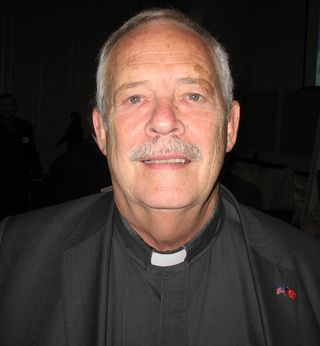 But the other night here in Kansas City, at the "Annual Dialog and Friendship Dinner" of the Institute of Interfaith Dialog, a Catholic priest, quoting 20th Century Islamic scholar and spiritual leader Said Nursi, offered a different -- and better -- take on Islam's enemies.

Nursi, whom Fr. Thomas Michel (pictured here) of Georgetown University's Woodstock Theological Center, called one of "the greatest thinkers of modern Turkey," wrote a commentary on the Qur'an of more than 6,000 pages.

Michel said Nursi believed that "Muslims and Christians together had a mission in this world to live out the values of our faiths in such a way that it showed the strength of those values in an increasingly non-religious world. He didn't see it as a matter of combatting or a matter of fighting but as a matter of living our religions deeply."

Clearly there are both Muslims and Christians who, to the detriment of all of us, reject that advice and prefer to demonize the other. But that's a road that leads not to peace but to anything but peace.

By the way, this annual dinner was sponsored not just by the Raindrop Turkish House, which is affiliated with the Gülen Movement in Turkey, but also the Division of Diversity, Acces and Equity of the University of Missouri-Kansas City and The Fountain magazine.

A related event takes place at 6 p.m. tomorrow in the UMKC Student Union. Turkish columnist and author Mustafa Akyol will speak on "Islam and Freedom: Destined to Clash?" The event is free, but RSVPs are requested to kansascity@interfaithdialog.org.

A CHURCH WILL LIVE AGAIN AFTER 9/11

It has taken a long time, but it looks now as if there are concrete plans to rebuild the Greek Orthodox church that was destroyed in the 9/11 terrorist attacks. Gov. Andrew Cuomo of New York made that announcement at a luncheon of the Archdiocesan Council of the Greek Orthodox Archdiocese of America and the National Philoptochos Board. Construction of St. Nicholas Church won't begin for another year, however, because of work that must be completed first.