No doubt many of you remember the Rev. Ted Haggard (pictured here), former head of the National Association of Evangelicals, and the 2006 same-sex scandal that caused him to resign from his megachurch in Colorado Springs and from the NAE. 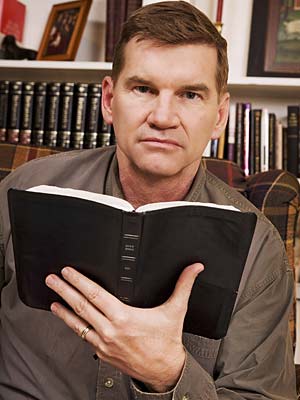 Well, Ted maintained that he was heterosexual throughout most of this ordeal but last year he said that if he were 21 years old in our culture he'd probably identify himself as bisexual.

When the scandal broke, I wrote a column for The Kansas City Star suggesting life would be much better for Haggard if he'd simply acknowledge who he is sexually and not try to jam his life into the rigid anti-gay culture found in many Christian churches that describe themselves as evangelical or conservative.

It now turns out that Haggard is out in public arguing in favor of same-sex marriage. He has done this in an online debate or discussion with a rabbi. Clicking on the link in this paragraph will take you to that debate.

Well, he's in favor of same-sex civil marriage but he still thinks scripture condemns homosexuality and that it's God's plan for people to express their sexuality in heterosexual marriage. But he says it's not the state's role to worry about that or to bless any unions in a sacred way. Rather, blessing unions is the role of faith communities.

So, he says, the state's job is to protect the civil rights of everyone, and this includes allowing same-sex couples to enjoy the same rights, privileges and responsibilities as anyone else.

In other words, Ted Haggard and I agree about same-sex marriage -- except that I don't believe the Bible condemns what we're beginning to understand today as homosexual orientation. For my essay on what the Bible says about homosexuality, click here.

If this whole same-sex marriage matter were settled the way I'd like it settled, any couple, gay or straight, would have the legal right to a civil marriage. If that couple then wanted a faith community to bless that union, that blessing decision would be up to the faith community. So a church still could say no to a legally married same-sex couple.

Maybe some day Haggard also will see that he's misreading what little scripture has to say about homosexuality.

In the spirit of bipartisanship (a concept now all but obliterated in Washington, D.C.), Bob Dole writes this lovely tribute to George McGovern, who died Sunday at age 90. The two of them worked together to relieve world hunger. I had the privilege of knowing McGovern a little. I went to South Dakota in 1974 to cover his Senate race against the GOP candidate, former POW Leo Thorsness. And I did a lengthy interview with McGovern later that year at the Democratic mini-convention in Kansas City. One did not have to agree with all of McGovern's political positions to recognize that he was a thoroughly decent man who represented the best of public servants. I like to think that in some ways it reflected the theology he learned from his father, who was a Wesleyan Methodist pastor.