The other day here on the blog I wrote about religious mysticism, focusing especially on the Jewish mystic path of Kabbalah because a rabbi with Kansas City connections has written two new books on the subject and will talk about them in presentations this week. (For details, click on the link in this paragraph.) 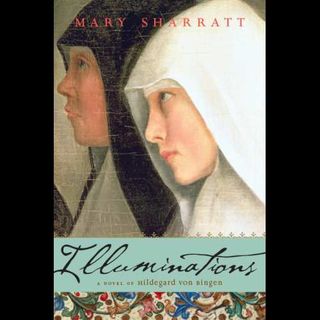 The topic of mysticism (mystics seek a deeply personal and direct experience of God) returns here today partly because of publication of a new novel about one of the most famous Christian mystics, Hidegard von Bingen (1098-1179).

As my regular readers know, I don't often review or write much about fiction, feeling that it's generally outside my range of competence. So when I tell you that Illuminations: A Novel of Hildegard von Bingen, by Mary Sharratt, is a lovely read, you can trust me or not. (It really is. Trust me.)

But if you're not familiar with Hildegard, this new book not only will give you a good sense of this remarkable woman, a "doctor" of the church, but also let you imagine what life was like in the period of the First Crusade.

Hildegard, starting as quite a young child, saw visions and was convinced that God was communicating personally to her. Yes, I know that today we tend to want to institutionalize such people -- and often with good reason. But it's clear that Hildegard was tuned into the divine in some special way, and it led her to produce books, music and letters (even to popes) that survived and stood the test of time.

A few years ago I ran across a statement in Jacques Barzun's wonderful book, From Dawn to Decadence, in which the social historian said that there wasn't much of a tradition of mysticism in Roman Catholicism. That struck me as off base, so I asked Kansas City's Catholic bishop, Robert W. Finn, about it, and he confirmed my suspicion. Here's some of what Finn had to say about the subject:

"I believe your surprise at Barzun’s characterization is warranted. I do not know Barzun’s book, but Catholicism certainly embraces an authentic mysticism. It would be difficult to compile any list of saints that do not include mystics (both from contemplative and active life). Indeed the Universal call to holiness emphasized by the Second Vatican Council was a reminder that we are all called to a deep intimate prayer which urges us – by the action of God’s grace in us – to transforming union. . .Catholic Mysticism is not tied to 'techniques or ascetical practices' which somehow cause union, nor is it a kind of Gnosticism – reflected today in 'New Age' (movements) where the One Eternal Word of God is displaced by human words or representations."

Yes, Finn said this and more about mysticism before he got into recent legal trouble over not reporting a priest of suspected child sexual abuse, but that latter matter doesn't mean he didn't know what he was talking about on the subject of mysticism.

I suspect the reason mysticism has not perished as a religious movement but, rather, spread is that almost everyone deeply wishes to have some kind of personal or direct confirmation that there is a God and that God cares about what happens to each of us.

Often, instead, what even people of faith experience is silence from God. (The fabulous book to read is Hope in Time of Abandonment, by Jacques Ellul.)

As the silly federal Defense of Marriage Act suffers another deserved blow in the courts, a new poll finds that one more group previously opposed to same-sex marriage -- Latinos -- has changed and a majority now supports it. Eventually the biblical misreading on homosexuality will become a marginalized, extremist view, and people will get on with their lives.

P.S.: The major newspaper in that most Mormon of Mormon states, Utah, just endorsed, well, not the Mormon for president. I have no doubt Mitt Romney will carry Utah by a bunch, but this must be a bit painful and embarrassing for him.