When Americans complain about corruption, much of the time it's not about having to pay a $10 bribe to someone at the Department of Motor Vehicles to be able to renew your driver's license. 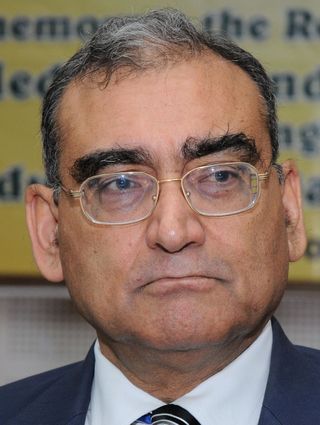 Rather, it's more likely about the noxious influence of Big Money on our political process.

In many other countries, however, especially in the developing world, corruption hits home on an almost-daily basis as people realize that just to negotiate daily life requires petty bribery.

My friend Markandey Katju (pictured here) a retired justice on India's Supreme Court and currently head of the Press Council of India, has written an enlightening essay on why, as he notes, "There is no doubt that there is rampant corruption in Indian society at almost every level."

Before I give you a link to Katju's essay, however, let me explain a reference early in it. He talks about Anna Hazare and some "agitation" relating to him (yes, Anna is a him). Hazare is an anti-corruption activist in India. His real name is Kisan Baburao Hazare. The link earlier in this paragraph on Anna's name will give you a recent news story about some of his activities.

Katju and I have been friends since I lived in India for two years of my boyhood in the 1950s and we met at school in Allahabad. His grandfather was India's first defense minister after the country achieved its independence in 1947. As a Christian, I tend to look at issues like corruption through a theological lens that considers the presence and origin of sin in humans. Katju is an atheist and, thus, comes at this question from a different perspective. So it's interesting that we don't disagree about much on this matter.

OK, look. This item has almost nothing (maybe less) to do with religion, but I have a profound dislike for exclamation points. They seem to me to be a wasted effort to project an emotion that the words should have carried. But they are everywhere, especially in e-mails and texts. And this interesting piece offers an analysis of some of their uses, along with some other punctuation marks. If you take my writing classes (Look under the "Where's Bill Speaking" item under the "Check this out" headline on the right side of this page) at the Writers Place in November, do me a favor. Leave your exclamation points at home. Well, wait: I'll toss in a bit of religion here. For God's sake, leave your exclamation points at home. They make you seem like an amateur.