For my money, the best theology is a theology with some built-in humility, given that anything we say about God -- anything at all -- is arrogant, coming as it does from finite beings. 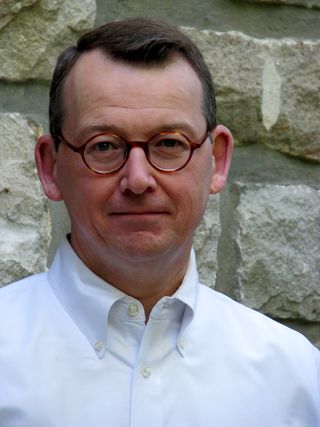 The late (and great) theologian Shirley C. Guthrie puts it this way in his (yes, Guthrie is a male) book Christian Doctrine: ". . .we will be good theologians when we are modest theologians, recognizing our own limitations, recognizing that we may be wrong at this or that point, knowing that we need to be open to let ourselves be helped by as well as to help, to be changed by as well as to change, those who think differently from us."

A friend made a similar point the other evening when he gave an excellent presentation at the Downtown branch of the Kansas City Public Library on "Why Read the King James Bible?"

Douglas Hundley (pictured here), like me a writer and an elder at Second Presbyterian Church of KC, hung his point on the little word "yet."

He quoted part of Psalm 8 in the KJV, but then noted that at least three other translations of verse 5 (the Jerusalem, English Standard and New Revised Standard versions) all begin with the word "yet."

Here's the Jerusalem Bible's translation: "Yet you have made him little less than a god. . ." (The reference is to the question in the previous verse, "What is man, that thou art mindful of him?. . ."

Doug noted this: "The word 'yet' links seemingly contradictory things: humility, exaltation. The word 'yet' reminds us that even the stars are made of dust.

"I think there may be a whole theology in the word 'yet'."

Doug is right. In fact, we all might do well to say the sentences of the creeds or words of common belief and then try to create a useful sentence next beginning with the word "yet."

For instance, we all have heard it said that "God is love." What if we then say, "Yet, there is hatred in the world." And ask why.

Or this: "Jesus is called the Prince of Peace." And then we could say, "Yet there still is so much war on the planet." And ask why.

The idea is not to destroy or denounce belief. Rather, the idea is to help us realize that words are inadequate to explore the divine. Yet, they are a primary tool.

I've just finished a draft of a column that will run at this online site of the National Catholic Reporter on Aug. 22. It is an ". . .and yet" column, drafted before I heard Doug's wise words. (I commend it to you.)

That may mean Doug and I think too much alike to be very useful to one another. And yet I think we do learn from one another.

New York Times columnist Frank Bruni has it right about the now-ended London Olympics: They "have affirmed that human potential is just about infinite and that the human soul is good." The essential goodness of humanity is something about which we need to hear, especially in contrast to the doctrine of Original Sin. At the same time, we must be aware of what Martha G. Nussbaum calls "the fragility of goodness." That fragility means that ultimately things decay, fall apart, turn bad. Well, not ultimately. But penultimately. Ultimately, the great religions insist, goodness prevails over evil. And the recent Olymics have been a small reminder of that truth. (By the way, 99 percent of you may disagree, but I thought the choice at last night's closing Olymics ceremony to sing John Lennon's song, "Imagine," with its approving line asking people to imagine "no religion, too" was out of place. In a world in which most people are adherents of one religion or another, why would you want to call for the abolition of religion in a venue that famously celebrates world harmony, if not unity? Bad choice.)