Within almost every group of any sort, there are inside-baseball jokes or observations or stances, but generally it is not, well, kosher if people outside the group tell those jokes, make those observations or adopt those stances. 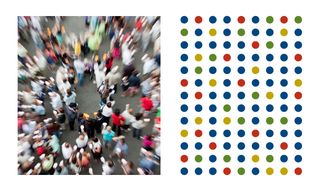 For instance, we Presbyterians frequently refer to ourselves in a self-depracating sort of way as "The Frozen Chosen," by which we mean that we keep our emotions in check and do everything "decently and in order," to quote the Apostle Paul, who was not, as far as I know, the first Presbyterian.

But it feels like being picked on when a Methodist or a Catholic or a Hindu refers to us as The Frozen Chosen.

Which brings me to the fascinating question about Jews raised by a Jewish writer in this column: Do the Jews own anxiety? Another way of asking it: Is neurosis inherently Jewish? (Kansas City makes it into this column. Look for it.)

Non-Jews like me feel inevitably like an unwelcome outsider even asking that question, and yet, as the author makes clear, many Jews seem to encourage others to think of Jews that way.

That said, the author properly points out the dangers of such a stance, and I agree.

It's the age-old problem of labeling people. And as I've said over and over, labels hide much more than they reveal. It can be especially damaging to put a negative, or derogatory, label on a group of people.

What we must remember is that although all human beings -- no matter their ethnicity, religion, race, sex or anything else -- are much more alike than they are different, no group is so homogenous that within it you can't find great differences among its members.

So to call me a Presbyterian, for instance, is to say almost nothing in detail about me, given that Presbyterians are all over the lot theologically, economically, socially and politically.

Mentioning groups can be a helpful shorthand (Missourians, Unitarians, Americans) but to think that all members of the same group share the same this or that is the road to destruction.

WHEN SCRIPTURE RATTLES US

A snake-handling preacher whose father died of a snake bit has, himself, now died of a snake bite. It's almost inevitable that people who focus on one tiny (as well as unimportant and even dubious) passage of holy writ will wind up in trouble. (See Fred Phelps.)