One of the stories Rabbi Jacques Cukierkorn and I tell in our book, They Were Just People: Stories of Rescue in Poland During the Holocaust, is about how Jerry Koenig, his brother and parents survived by hiding in a barn of a willing Polish farmer not far from the Treblinka death camp. 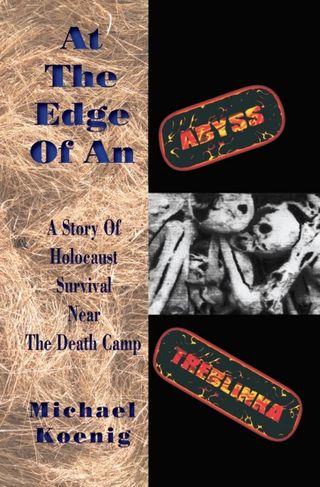 It's an astonishing story of a whole family surviving together with seven others in a secret bunker, but a story filled with close calls and great pain when one of the people living in the bunker gave birth to a baby whose cries could be silenced only through poisoning the child so that others could live.

Now Jerry's brother Michael Koenig, who is a couple of years younger than Jerry, has written his own account of his family's survival in At the Edge of an Abyss: A Story of Holocaust Survival Near the Death Camp Treblinka.

I found it a remarkable experience to relive the story Jerry told us but this time through his brother's eyes. And Mike Koenig's telling of the tale is done with important attention to detail and with good insight about how it was to be cut off from the world for so long.

This is one more nail in the coffin of the insane sickness known as Holocaust denial.

Mike Koenig's memory is quite good, though even he acknowledges that details fade over time and from time to time he tells readers that this detail or that has disappeared from his memory.

But this clearly is the story of an eyewitness to the genocide carried out by Hitler's Germany, and we are fortunate to have the story preserved.

One of the things that helped Mike draw back the story all these years later is that he's been making notes about his memories for decades -- though until now those notes essentially have been unpublished.

He is kind enough twice in this book to take note of the book Rabbi Jacques and I wrote and to point out that while Jacques and I were in Poland doing interviews for our book, we did our best -- without success -- to find members of the family that saved the Koenig family. We tell that story in the chapter on Jerry Koenig.

The day that Jacques and I spent looking for members of the family that rescued the Koenigs we also visited Treblinka (that's us there in the photo at right), where hundreds of thousands of Jews were murdered in less than a year. At one point while the Koenigs were living in the barn, they could smell the smoke of human flesh being burned at Treblinka.

There are broad histories of the Holocaust written by gifted academics and other scholars. This book, by contrast, is a personal story that could be told only by a survivor. And it's told well.

IS THERE A KENTUCKY FRIAR CHICKEN, TOO?

How do chickens and religion mix? I mean beyond those satanic poultrygeists. The Smithsonian's website has an entry on chickens that gets at that question this way: "Chickens were, and still are, a sacred animal in some cultures. The prodigious and ever-watchful hen was a worldwide symbol of nurturance and fertility. Eggs hung in Egyptian temples to ensure a bountiful river flood. The lusty rooster (a.k.a. cock) was a universal signifier of virility—but also, in the ancient Persian faith of Zoroastrianism, a benign spirit that crowed at dawn to herald a turning point in the cosmic struggle between darkness and light." In terms of faith, in other words, the buck-buck stops here.