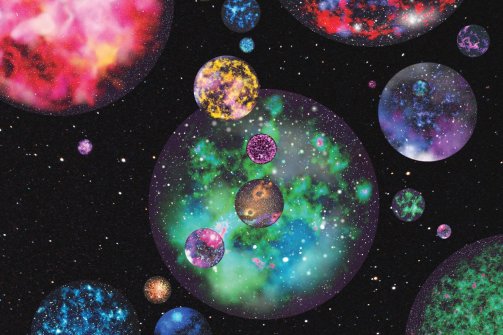 Ever since I read The Elegant Universe by Brian Greene more than 10 years ago, I've been a fan of Greene and his ability to make the weird and wonderful world of subatomic physics understandable (well, sort of) to lay people like me.

He's done it again in the cover story of the current Newsweek, "Welcome to the Multiverse."

The possibility that our universe -- the whole shebang -- is just one of billions of universes, which is exactly the idea Greene says scientists now are seriously considering, raises elegant and eternal questions about all kinds of things, including religion.

It's important to remember that quite often when religion has attempted to say something about the science of how the world works, it has been wrong.

The famous case of the Catholic Church condemning Galileo for saying that the Earth revolves around the sun is just one example, though perhaps the most embarrassing. Well, wait. The list of religion's statements about science is long and laughable, so maybe we would do well to hold off giving out the prize for the most embarrassing.

Another on that list is the ludicrous idea -- still held by many people -- that Earth is only a few thousand years old.

So when cosmologists begin to suggest that perhaps there are tons of universes out there and that maybe ours isn't so special after all, it raises questions about whether the biblical accounts of creation and humankind's central place in God's heart are credible.

I'm not suggesting that the central message of scripture -- that God created the world moved by the impulse of love -- is wrong. Not at all. But if Earth, the only planet we know of to sustain life, is but one tiny speck of dust in an unimaginably vast creation, perhaps our ideas about God are far too small.

What String Theory and ideas about the multiverse do is cause those of us who are people of faith to regain a sense of humility, given how much we don't know and the size of what we will have to explore if we are to reduce our ignorance.

Ah, the life of the clergy. Folks who operate a rabbinical court in southern Israel have just heard a divorce case in which a man says he wants to leave his wife because he can't live both with her and her 550 (count 'em) 550 cats. Several of the punchlines that come to mind are inappropriate for a family-friendly blog.

P.S.: You're running out of time to sign up for one or both of the two classes I'm co-teaching at Ghost Ranch in July, so don't wait. For details about the class on end-of-life issues and the class on forgiveness, click here. Ghost Ranch is a beautiful national Presbyterian conference center in northern New Mexico. One week there will change your life forever. Really.

ANOTHER P.S.: My friends over in the "Our Values" section of ReadTheSpirit.com continue to ponder why so many Americans (compared with citizens of many other countries) express a belief in God. Late this week they even reacted to something I wrote about the subject, both agreeing and disagreeing with me. To read their comments, click here.